By Charles Robb
Overview of a religious public service campaign.

In the movie Oh God! Book Two a little girl is chosen by "The Owner of the Store" to be His messenger. Since the eleven-year-old's father is in advertising, she suggests that God get a slogan in order to become a household word. Here are a few of her attempts: (1) How do you spell relief? G - O - D. (2) You're in good hands with God. (3) God is bullish on humanity. (4) Let God put you in the driver's seat. But since these are too derivative, the little girl and her friend come up with "Think God." They put the slogan on billboards and other public spots.

In 1998, an anonymous client gave the Smith advertising agency in Fort Lauderdale, Florida, $150,000 to create an ad campaign that would speak to people of all religious persuasions. The campaign became a phenomenon: eventually the Outdoor Advertising Association of America picked it as their public service campaign for a year and ran it in 200 cities nationwide. Of course, all of this only puts into action what Herman Melville said in a letter to Nathaniel Hawthorne many years ago: "Take God out of the dictionary, and you would have Him in the street." Here are a few of our favorites from this thought-provoking campaign. 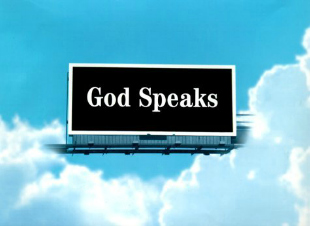