By Mary Lou Kownacki
Poems and commentaries on the dark side of a spiritual journey.

This book is a follow-up to Between Two Souls: Conversations with Ryokan by Mary Lou Kownacki, a Benedictine Sister who is the director of Monasteries of the Heart, a new online monastic movement. She also has been instrumental in developing innovative programs that serve the neighborhoods of Erie, Pennsylvania, including founding the Inner City Neighborhood Art House, where she teaches poetry to children.

In Old Monk, Kownacki has pondered poems by Han-shan, a 9th century poet and recluse whose work has been collected in the classic book Cold Mountain. After reflection, she wrote her own poem and commentary in response.

Kownacki writes unabashedly about her experience of fear on inner city streets, her loneliness as a writer, her righteous indignation over "the snail-like pace of full equality for women in the church," the straining of her commitment of nonviolence when it comes to abuse of women and children, and the burdens of being a writer with a conscience.

There are other poems and comments which are in a more positive vein where Kownacki affirms her belief in being true to your word, where she pays tribute to the beauty and majesty of friendships, and where she waxes poetic over good memories. But the author shocks us with her honest feelings about monastic life, especially in this poem where she confesses:

"Let Old Monk tell you the truth:
living in a monastery is a George Carlin routine,
on the edge, biting, taking you
where you don't want to go,
nervous laughter, a sawed knife
cutting out your heart"

Kownacki shows us that the spiritual journey often is shrouded in darkness and depression. It takes courage and perseverance to stay on the path of faith especially when there is so much suffering, pain, and loss around us. Let Old Monk take you where you don't want to go and you will be surprised by what you see and feel! 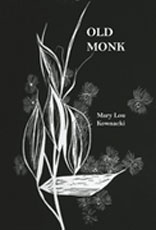