Sacred Ground Pluralism, Prejudice, and the Promise of America

By Eboo Patel
A challenge to work together to shore up the idea and the ideal of religious pluralism.

Eboo Patel is the founder and executive director of the Interfaith Youth Core, an international nonprofit that is building an interfaith youth movement. He is an American Muslim of Indian descent. His first book Acts of Faith: The Story of an American Muslim, the Struggle for the Soul of a Generation (2007) is a fascinating and timely memoir about his calling to educate a new generation to the values of religious tolerance and service to all humanity.

In this profound and prophetic book, Patel identifies the hard work that must be done to shore up, strengthen, and extend religious pluralism in America. In the introduction, he quotes Alexis de Tocqueville, a nineteenth century visitor to the nation:

"The greatness of America lies not in being more enlightened than any other nation, but rather in her ability to repair her faults."

It's up to today's generations, writes Patel, to make sure that observation is still true. American pluralism is under attack, and religious and spiritual people must take on the responsibility of protecting and repairing it.

Patel does a fine job presenting the swift rise and spread of Islamophobia following 9/11. When Imam Feisal Abdul Rauf, a progressive Muslim, announced plans to create a Cordoba House, using the name of the Spanish medieval city where people of all religions coexisted peacefully, on a site near Ground Zero, he was immediately attacked for trying to establish a "Victory mosque" for terrorists. Speaking out in favor of this project, Patel was labeled a terrorist by those caught up in religious hatred and prejudice. It took the wise words of Shaykh Hamza Yusuf, a mentor, to help Patel calm down his anger. He decided to intensify his interfaith outreach programs as his solid contribution to religious pluralism.

The author has been gratified to see a more positive attitude by Evangelicals towards Muslims and hopes that this change in perspective can lead to more cooperative ventures. Patel reflects on his experiences of raising children in a religiously diverse world and then goes on to discuss interfaith leadership in colleges and seminaries. This bridge-building work is designed to deepen and enrich religious diversity and to bring fruition to the ideal expressed by Christian theologian Cantwell Smith:

"The problem is for us all to learn to live together with our seriously different traditions not only in peace but in some sort of mutual trust and mutual loyalty." 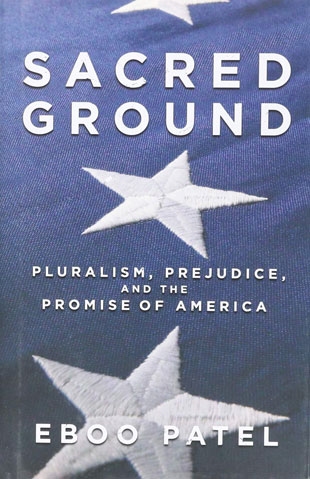