Upside Down A Primer for the Looking-Glass World

By Eduardo Galeano
A watershed work on justice with its heartbreaking portrait of those left out of the rising tide of economic benefits and privileges enjoyed by the rich and the powerful.

Eduardo Galeano, author of the Memory of Fire trilogy, is one of Latin America's most distinguished writers. Donning the mantle of a prophet for our time of ethical disarray and massive inequality, he puts a metaphor at the heart of this compelling work: "The upside-down world rewards in reverse: it scorns honesty, punishes work, prizes lack of scruples, and feeds cannibalism. Its professors slander nature: injustice, they say, is a law of nature." And who are the losers and the put-upon in this upside-down world? — the poor, children, women, and people of color.

With withering accuracy, Galeano charts the suffering of all those left out of the rising tide of economic benefits and privileges in the United States. He talks about the millions of abandoned children in the streets of Latin American cities, the women around the world who sell their bodies in order to survive, and the thousands of blacks and Hispanics in prison for possession of drugs.

According to the author, the worst violators of nature and human rights never go to jail. They hold the keys to the kingdom of the world economy: "The countries that guard the peace also make and sell the most weapons. The most prestigious banks launder the most drug money and harbor the most stolen cash. The most successful industries are the most poisonous for the planet. And saving the environment is the brilliant endeavor of the very companies that profit from annihilating it." Meanwhile, at the other end of the spectrum, "Jails and bullets are the proper therapy for the poor."

The rich and the privileged are captives of fear and will do anything to feel more secure. This goes for the middle class as well. Galeano looks at the flourishing industries of private police and security systems for homes and offices. He examines many other examples of egregious injustice and madness that are part and parcel of the looking-glass world: malls as the cathedrals of our times, the growth of the world market in arms sales, the crusade against drugs as a cover for social war, and the mass media's casting everything into the single mold of consumerism. 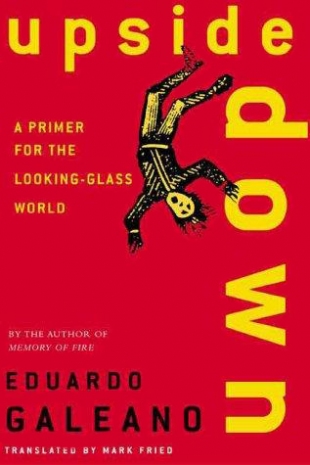