Singing to the Sound Visions of Nature, Animals and Spirit

The thought-piece quotation at the start of this sterling collection of essays is from Gerard Manley Hopkins's "Inversnaid" — "What would the world be, once bereft / Of wet and wildness? / Let them be left, / O let them be left, wildness and wet." This is an entirely appropriate selection since Brenda Peterson has lived for 20 years on the shores of Puget Sound in Washington State.

In a piece titled "Bread Upon the Water," an old man walking on the beach says to her: "Seagulls memorize your face. They know their neighbors." Peterson likes that perception. She demonstrates her affection for birds and other creatures by telling them she's sorry for the Valdez spill, for the PCBs in the water, and for the garbage thrown by people all over the place.

Other ecologically oriented essays are on the story of the relationship between some inner city kids and animals, an interview with a husband and wife research team who listen and record Orcas, an overview of the battles between wolf advocates and those who want to kill them, and an up-close look at the controversial Makah whale hunt that stirred up a hornet's nest of concern among environmentalists.

Brenda Peterson's compassion for besieged animals and environmentally damaged places is very commendable. One of the best essays is the one where she celebrates "the unexplored and often undervalued territory of human and animal play." 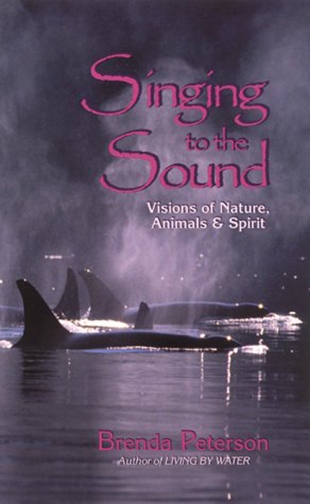