Living from the Center Spirituality in an Age of Consumerism

By Jay McDaniel
A watershed work of Christian activism.

Jay McDaniel is professor of religion at Hendrix College and the author of three books including With Roots and Wings. His ecotheology, practice of Zen meditation, and knowledge of the world's religions are what make this zealous vision of Christianity for the twenty-first century so imaginative, concrete, user-friendly, and capacious. McDaniel, who cherishes poetry as a wonderful vehicle of grace, lyrically begins with an explanation of spirituality as practicing the presence of God or "openness to God's breathing." Both of these images aptly convey the full and fluid movement of the indwelling Spirit.

McDaniel presents nine ways of knowing God: discernment, sacramental awareness, openness to healing, living-by-dying, trust in open space, deep listening, courage in suffering, creativity, and loving-kindness. These are the building blocks for the abundant life that Jesus talks about in the Gospel of John. That life, according to the author, contains wisdom, compassion, and interior freedom.

All of these spiritual resources make it possible for Christians to "live from the center." This approach is an alternative to consumerism, where bigger is better, the fastest is best, more is better, and the individual believes that he or she can have it all. McDaniel shows that small is beautiful, good things come slowly, enough is enough, and we don't need it all.

Ah, but what a difficult challenge to let go of or move beyond an addiction to consumption-driven desire, money as the measure of value, and the worship of appearance, affluence, and marketable achievement. I like the way McDaniel calls himself a recovering fundamentalist (as one who tried early in his life to lock God in a box). I see myself in the same way. After reading this astonishing work I feel compelled to add that I am a recovering consumerist as well!

Part of what it means to be "a fool for Christ" is to live and act in ways that go against the central organizing principle of consumerism. McDaniel gives plenty of suggestions just what this entails. The "lure toward wholeness" is a more simplified life, a respect for the Earth and its bounties, and a deeper appreciation of the way the rest of the world lives — the other four-fifths of our human family, as McDaniel puts it.

Living from the Center points the way into the future for the Christian community with its fine-tuned melding of spirituality and ethics. McDaniel's imagination, hospitality, openness, and wide-eyed wonder are qualities of a new sainthood of believers who are making their presence known in our time. Form an adult study circle to read and discuss this book. At one point, McDaniel calls himself a Christian in the making. Here's a soul-stirring resource for those joining him on that journey. 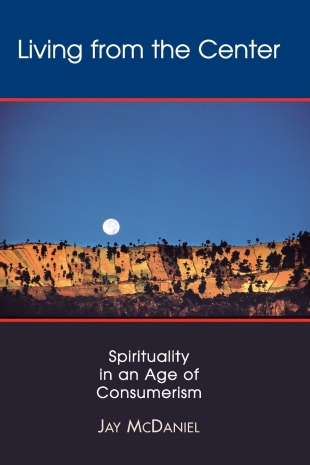