The Cat with Seven Names

By Tony Johnston
An engaging children's book about a gregarious and wandering cat who visits six lonely people in his neighborhood and becomes their reliable companion.

A lonely librarian is visited one night by a cat she figures is a stray. She feeds him and he falls asleep on a bookshelf. He becomes a regular guest she reads to; she names him Stuart Little.

Then the same cat befriends a man with a walker who is glad whenever he sees him. He dubs the cat Kitty-boy. The same cat also spends time with a Mexican opera lover, a cop, a homeless man, and a little girl who has just moved to town. They each give him a different name. When this gregarious feline is nearly injured, the six people, as well as the cat's original companion, are drawn together.

The Cat with Seven Names is written by Tony Johnston, the author of more than 100 books for children, and illustrated by Christine Davenier. It is designed for boys and girls between the ages of 5 and 8 years old. Set in a city, the story shows the loneliness of people and the large and important roles pets play in providing them with love and happiness. Children will find it very easy to open their hearts to this portly cat who is like a saint to the six people he befriends. 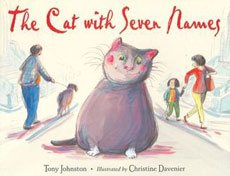