By Shirley Hershey Showalter
A sprightly and well-written memoir about the childhood and coming of age of a Mennonite girl who wants to make a splash in the world.

Before reading this sprightly and well-written memoir, sit for a while with the epigraph for the book taken from Eudora Welty's One Writer's Beginnings: "The sheltered life can be a daring life as well. For all serious daring starts from within." Let this thought simmer in your consciousness. Think back about the people you've known, your relatives or perhaps friends of your parents who lived sheltered lives where not much happened in terms of tragedies, conflicts, or major changes. If you are like us, some of those you remember came from farms or small town communities or were relatively protected in the suburbs. New and different were just not part of those landscapes.

Now recall if any of them surprised you with a daring act that caught your attention and turned around your opinions of them. Bold acts of conscience and definitive acts of rebellion can emerge from quiet and humble souls who live far from the bright lights of modern cities. We rejoice in recognition of those inner qualities which give rise to radiance, a spiritual quality which shines out of people when we least expect it.

Shirley Showalter recounts how she was raised in a loving Mennonite farm family in Lancaster, Pennsylvania. Brought-up in a conservative culture that honored plainness, humility, and hard work, her mother named her "Shirley" after the actress Shirley Temple. Secretly, this energetic little girl yearns "to make a splash" in the glittering and fancy world which was anathema to most Mennonites.

Instead of lashing out at the restrictions that confined her, Showalter accepts them and tries to do her thing as best she can. She is proud to learn that her mother was an actress and wanted to be a writer. Her father relishes being a farmer. Showalter praises "the beacon of kindness" in her parents and strives to emulate it in her own life as well.

Which takes the largest amount of daring? To rail against those who are trying to shape you and control you? Or does it consist of opening your heart to those "who continue to maintain boundaries between the plain church and the glittering world"? Showalter chooses the second path which is far more difficult. Even at 18, she would have no idea of what was to follow: becoming President of Goshen College and then a foundation executive at The Fetzer Institute. She is now a writer, speaker, blogger, and consultant living in Harrisonburg, VA. Showalter is still a Mennonite and not afraid to pay tribute to the church that immersed her in love and would not let her go. 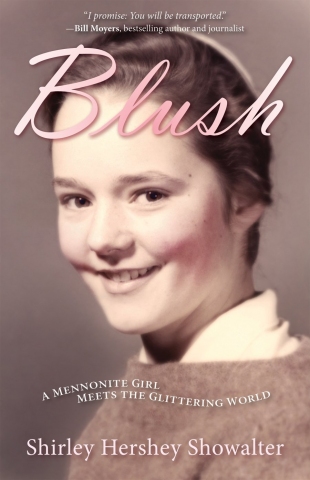