By Kelly Besecke
A delineation of reflexive spirituality as a middle path between Christian fundamentalism and a spiritually vacant secular society.

Many young men and women are seeking a path that eschews the dogmatism, arrogance, and exclusivity of "unbelievable religious traditionalism" and "a spiritually vacant secular society obsessed with material gain and content to go through the motions of life without asking the deeper questions," observes Kelly Besecke, a writer and editor in Austin, Texas, whose research has been honored with a Louisville Institute fellowship and an award from the American Sociological Association's Section on Sociology of Religion.

Besecke believes there is a middle way, known as "reflexive spirituality," a term coined by Wade Clark Roof. She defines it as "a thoughtful, deliberate, open approach to cultivating religious meaning." Some of those who choose to take this path are troubled by scientism and technological reason which have launched attacks on religion and tried to banish the transcendent from dialogue about the challenges of these times.

On the other hand, reflexive spiritualists are turned off by what they see as "flat religion and flaky spirituality." As an antidote to these excesses in belief, we see a new emphasis on mysticism where the transcendence and mystery of God are emphasized. Or as Huston Smith has put it: "The world's religions speak with one voice to the thesis that there is more to the universe than what we pick up with our senses."

In a spunky chapter on "The God of Reflexive Spirituality," Besecke shares pithy sayings that address the concept of Infinite God:

Put these all together and you have a God who is-out-of-the-box and doing quite well, thank you.

Besecke ends on a positive note by summing up some programs and Christian communities that are brimming over with dialogue about questions that matter. You Can't Put God in a Box offers a rallying cry for meaning makers. 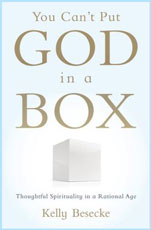