By Inga Moore
A rousing tale of adventure, cats, and greed based on an old Italian tale.

Inga Moore has created many beautiful children's books based on classics such as Kenneth Grahame's The Wind in the Willows and Frances Hodgson Burnett's The Secret Garden. This story of Captain Cat is based on an old Italian tale that appealed to her love of adventure, cats, and interesting characters.

Captain Cat, a trader, has over the years collected a large batch of cats who live with him aboard his ship the Carlotta. There are more cats aboard than there are sailors. When their ship is blown off course during a storm, he and his crew find themselves sailing toward an island.

The Queen throws a meal for these visitors but the affair is nearly ruined by invading rats. The Captain's cats do their thing and the Queen is pleased with these creatures she has never seen before. She gives him a large number of diamonds and rubies in exchange for the cats. News spreads about the Captain's good fortune and other traders head for the island with dreams of becoming rich.

Captain Cat is aimed at children from three to seven years of age. Moore has done a marvelous job depicting the closeness between this trader and his animal companions. She also points out the waywardness of those who seek satisfaction or happiness in wealth when the real rewards lie elsewhere. 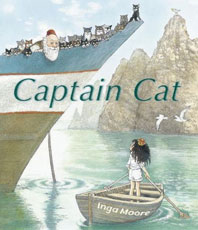