The Way of Passion A Celebration of Rumi

By Andrew Harvey
A rousing tribute to the great Sufi mystic and his vision of life.

You are more precious than both
Heaven and Earth.
What can I say more? You know not your own worth.
Sell not yourself a little price
Being so precious in God's eyes.

This is one of the spiritual poems of Jalal-ud-Din Rumi, arguably the greatest mystical poet of all time. In his lifetime (1207-1273), he composed 3,500 odes, 2,000 quatrains, a spiritual epic titled Mathnawi, and he founded the Mevlevi order of Sufism, also known as the whirling dervishes.

The Way of Passion is based on lectures given in 1993 at the California Institute of Integral Studies. Andrew Harvey is a prolific writer whose books include Hidden Journey: A Spiritual Awakening, Son of Man: The Mystical Path to Christ, and, most recently, The Direct Path: Creating a Journey to the Divine Using the World's Mystical Traditions. He describes Rumi as "an essential guide to the new mystical Renaissance that is struggling to be born against terrible odds in the rubble of our dying civilization." He sees this poet and prophet as a doctor of souls capable of helping us cultivate heart, passion, and personal transformation.

Rumi's mystical vision was founded upon an intoxicating love of God. Like his soulmate Shams-i-Tabriz, a spiritual vagabond, Rumi had respect for mysteries and was impatient with those who claimed to know the answers to life's most pressing questions. Again and again, his poetry reminds us of our Divine origin and the challenge to live within a state of constant receptivity and rapture. And it says something more. Rumi was once asked "What is a Sufi?," and he replied, "A Sufi is a man or woman with a broken heart." Meaning, we must be sensitive to the heartbreak of the world. This is a sign of our Divine origin.

According to Harvey, Rumi is a supreme master of adoration. Praise is the natural response to the source of our abundant blessings. "In love with him, my soul / Lives the subtlest of passions, / Lives like a gypsy — / Each day a different house. / Each night under the stars." The author quotes Teilhard de Chardin to bring home the relevance of this theme in Rumi's poetry: "Humankind is being brought to a moment where it will have to decide between suicide and adoration."

Harvey believes that Rumi is "an entire spiritual culture: both the record of the bliss and joy of Union, and a record of the pace, the cost, the stages, the evasion." In his verse we can find all the rhythms of abandonment, sacrifice, adoration, and transformation that are part and parcel of our relationship with the Beloved.

Rumi's love of music, dance, and poetry challenges us to commit ourselves to a resacralization of all the arts. A story is told about Rumi. One afternoon, a musician was playing the violin and the Master was listening with great pleasure. A friend entered and said, "Stop this. They are announcing the afternoon prayer." "No," said Rumi. "This also is the afternoon prayer. They both talk to God."

Harvey is convinced that studying and celebrating Rumi is "a discipline that aims at restoration of our souls." For in doing so, we practice adoration. We honor the mystery of our communion with God. We cherish the wisdom of the heart. We reject dualism and acknowledge the oneness of all. We come to the dance with joy. And, as a result, we seek to transform the world with our love.

Harvey has studied Rumi for more than twenty years, written several re-creations of his poetry, and edited a collection of his teachings. The Way of Passion: A Celebration of Rumi confirms Harvey's standing as one of the foremost spiritual writers of our age, gifted in conveying the essence of ancient teachings to today's seekers. This rare and precious book will stir the hearts of Rumi devotees and win many new converts. 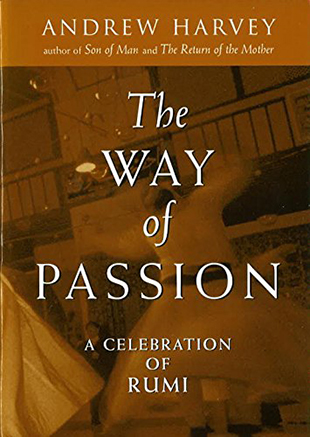