Empathy A Handbook for Revolution

By Roman Krznaric
A masterful and edifying book that presents the practice of empathy as a transformative virtue that can change individuals and the world.

Roman Krznaric is a founding faculty member of The School of Life in London, England. The Observer calls him "one of Britain's leading lifestyle philosophers." In this bold and adventuresome book, he has set out to form and fortify a new movement. Krznaric defines empathy as "the art of stepping imaginatively into the shoes of another person, understanding their feelings and perspectives, and using that understanding to guide your actions." He sees this virtue as going miles beyond the public's view that it is "a fuzzy, feel-good emotion." Krznaric is convinced that empathy can transform lives and put in motion a revolution in relationships.

What steps must be taken to unleash this empathy revolution? Whereas the twentieth century was the Age of Introspection with its heavy emphasis on self, this century is the age of Outrospection where the focus is on stepping outside ourselves and learning about other lives and cultures.

The empathy revolution is partly being spurred on by the scientific discoveries that we have a 10-section empathy circuit in our brains. In addition, evolutionary biologists have demonstrated that we are social animals who have evolved into empathetic, caring, and cooperative beings. Many people have been experimenting with empathy as a philosophy of life. For these people and others, Krznaric introduces an impressive group of mentors of empathic living, including Beatrice Webb, George Orwell, John Howard Griffin, Gunther Wallraff, and Patricia Moore.

In a short but sweet box, the author describes "The Six Habits of Highly Empathetic People" (see the excerpt).

One of the best ways to bring empathy to life in a variety of situations is by mastering the craft of conversation which taps into our curiosity about strangers, having patience for radical listening; removing your mask, having a concern for the other, nurturing a creative spirit, and demonstrating courage under pressure.

Finally, Krznaric shares a wide range of resources that give us a chance to develop and practice empathy. He suggests films that put the accent on stepping outside oneself (ekstasis) and an immersion in the life of another: Rabbit-Proof Fence, The Diving Bell and the Butterfly, and The Kite Runner. We can also practice empathy through photographs, novels, video games, and more.

Krznaric is optimistic about the development of a global empathic consciousness. He does a fine job reflecting on the greatest meeting of strangers in history which took place in England during World War II when more than two million children were relocated from town to country as part of a government program. A third wave of empathic projects described here deal with climate change and saving the animals. In the final chapter, Krznaric looks at a handful of promising organizations such as Empathy Museums, the Human Library, and the author's own online Empathy Library where people can share inspiring books, films, apps, and articles that can serve as catalysts to the transformation of self and of the world. 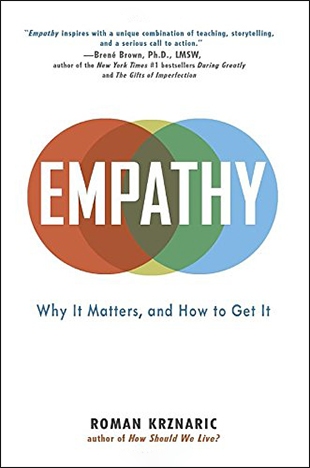 The Power of Empathy

The Age of Empathy

The Art of Empathy