The Third Freedom Ending Hunger in Our Time

By George McGovern
Argues that world hunger can be ended by 2030.

According to a recent estimate of the UN Food and Agricultural Organization, slightly fewer than 800 million people around the world suffer from hunger. Most of them reside in rural areas of developing countries. They depend on farming for both their food and their incomes. Although over 150 million people were killed by war in the last century, nearly three times as many died of malnutrition or related causes in the last half century.

George McGovern, the former Senator and 1972 Democratic presidential nominee, believes that world hunger can be ended by the year 2030. During the Kennedy Administration, he was the first director of the U.S. Food for Peace Program and since 1998 he has been the U.S. representative to the United Nations Food and Agricultural Organization in Rome.

McGovern lays out a five-point program to be spearheaded by the U.S. that involves a universal school lunch program for children; a supplemental food program for women, infants, and children; the establishment of food reserves around the globe; the improvement of local agricultural practices in developing countries; and the genetic engineering of crops.

One of the most important steps America could take in the fight against hunger, according to McGovern, is to drastically reduce this country's sales of arms to the developing world. He quotes former President Dwight Eisenhower:

"Every gun that is made, every warship launched, every rocket fired signifies, in the final sense, a theft from those who hunger and are not fed, those who are cold and are not clothed. This world in arms is not spending money alone. It is spending the sweat of its laborers, the genius of its scientists, the hopes of its children."

McGovern also has some cogent things to say about the terrible scourge of 31 million Americas who do not have enough to eat simply because they cannot afford food for themselves and their families each month. The Third Freedom: Ending Hunger in Our Time presents a level-headed and inspiring overview of a subject that, sadly enough, is not taken very seriously by many Americans. 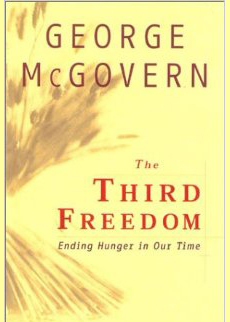