By Barbara Bonner
An inspiring collection of quotations, poems, and stories about generosity.

Barbara Bonner started her life as an art historian and then moved on to leadership positions at three New York Museums. She later served as Vice-President of Bennington College and Kripalu Center for Yoga and Health. She now has her own consulting practice focused on helping nonprofits transform their philanthropic support.

In this inspiring collection of quotations, poems, and stories, Bonner probes the spiritual energies of generosity which she defines as a practice that can change the world. She sees it also as compassion in action and as a major virtue in all the world's religions.

Bonner draws out the strong ties between philanthropy and generosity and goes on to explain her selection of 14 stories about generosity heroes.

Here is a sampler of quotes from the book. Let these words draw out your own best impulses to be of service to others:

• "Generosity is the most natural outward expression of an inner attitude of compassion and lovingkindness."
— His Holiness the Dalai Lama

• "If a beggar approaches me and puts out his hand, and I have only a $10 bill, I have to give it to him. It's none of my business whether he plans to spend it on infant formula for his starving baby or on a pint of Thunderbird."
— Barbara Ehrenreich

• "To cultivate generosity directly is another fundamental part of living a spiritual life. Like the training precepts and like our inner meditations, generosity can actually be practiced. With practice, its spirit forms our actions, and our hearts will grow stronger and lighter. It can lead to new levels of letting go and great happiness."
— Jack Kornfield

• "Real generosity toward the future lies in giving all to the present."
— Albert Camus

• "Charity should begin at home but not stay there."
— Phillips Brooks 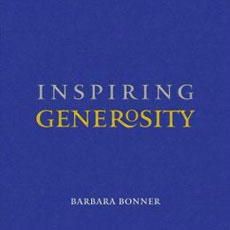