By Todd Miller
A wake-up all for those who have not kept up with the morally troubling expansion of the U.S. Border Patrol.

This shocking report on the expansion and influence of the U.S. Border Patrol is by Todd Miller, who has spent 15 years studying this agency and its dire impact on those who come into contact with it. It was born after the 9/11 terrorist attacks and has spawned itself in a multi-tentacled law-and-order monster.

The U.S. Border Control uses it muscle and clout to harass and harm the dignity and rights of illegal immigrants. But this is only a small part of the vast operations which have led to the deportation of 400,000 people per year, a sophisticated surveillance system for monitoring the activities of large numbers of Americans, and the booming prison industry.

Miller sums it all up:

"The U.S. Border Patrol is not just 'men in green,' it is much larger complex and industrial world that spans from robotics, engineers, salespeople and detention centers to the incoming generation of children in its Explorer programs."

Give the heated disagreements over immigration and migrant workers, Miller's trenchant work will most likely only preach to the choir. Nonetheless, it is an important wake-up call for those who have not kept up with the morally troubling expansion of this mammoth security apparatus. 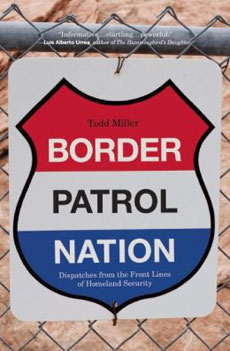