By Daniel C. Maguire
Looks to the world's religions to work together on healing the earth.

Here are a few of the ramifications and negative fallouts from the developed world's reckless treatment of the environment and the less fortunate human beings on the Earth, according to Daniel C. Maguire, Professor of Ethics in the Theology Department of Marquette University: On a typical day, 71 million tons of topsoil are lost. Less than one percent of the earth's water is safe to drink. Women constitute 70 percent of the world's 1.3 billion absolutely poor — those who do not have the basic necessities of life. More than 30 new diseases have been identified since 1973, many of them relating to our new and ecologically dangerous lifestyles.

Much of the earth-wrecking has been the result of global capitalism and the rampages of consumerism. The author, who is President of the Religious Consultation on Population, Reproductive Health, and Ethics, believes that the religions of the world are "great symphonies of hope." He notes: "It can be said of all the world's great religions, that they got sidetracked. The challenge today is to try to get back their original dynamism and apply it to our half-wrecked world."

We can take heed and begin to practice the simplicity of living advocated by Buddhists, the nonviolence of Hinduism, the emphasis upon harmony and balance in Taoism and Confucianism, the reverence for life of Islam, the hope for humanity in Judaism, and the quest for justice in Protestant and Catholic Christianity. Practiced rigorously, these religious virtues can turn the course of history around. 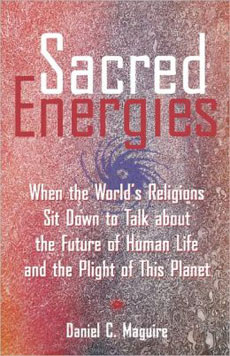