By Allen M. Schoen
Insights into animals by an integrative holistic veterinarian.

Allen M. Schoen, author of Love, Miracles, and Animal Healing, received a doctorate in veterinary medicine from Cornell University. But once in practice, he realized that there was more to treating animals than using the traditional tools of medicine, surgery, and euthanasia. Schoen began using alternative therapies in 1981 at Brook Farm Veterinary Center.

Megan, a Golden Retriever, opened his eyes to his feelings of kindred connection to animals. She became his unofficial nurse, a "Florence Nightingale in canine clothing" as he administered to a Noah's ark of animals. Schoen now calls himself "an integrative holistic veterinarian." In this fascinating book, he describes the value and flexibility of alternative therapies such as nutritional and herbal supplements, acupuncture and chiropractic, Bach flower remedies, and even aromatherapy.

Throughout Kindred Spirits Schoen tells stories about the healing powers of animal companions for the sick and the lonely. In one of the best chapters in the book, he outlines seven ways to foster a spiritual bond with your pet including co-species meditation, kindred relaxation, sharing mindful moments, and thinking like an animal. Schoen also suggests a natural pet scan that can be done in the home on a weekly basis to monitor health concerns. Kindred Spirits is a must-have volume for all animal lovers, and its spiritual messages about our connections to the animal world are ones we can all take to heart. 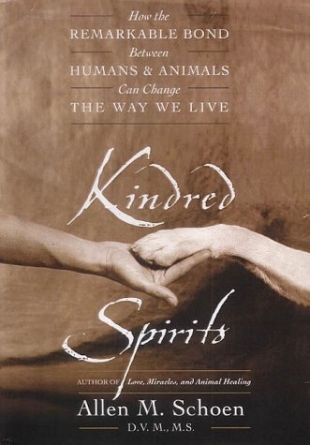