Constantine's Sword The Church and the Jews

By James Carroll
An encyclopedic overview of anti-Semitism in the Catholic Church.

James Carroll is the author of nine novels and the memoir An American Requiem, which won the National Book Award. He has a weekly column on culture and politics in the Boston Globe. Carroll wrote Constantine's Sword while on fellowships at Harvard University, where he is a research associate at the Center for the Study of Values in Public Life at the Divinity School. The author was a Catholic priest for five years. At present, Carroll describes himself as "an amateur Catholic — a Catholic, that is, holding to faith out of love."

In 2000, Pope John Paul II apologized to the Jews for sins against them by Roman Catholics. In this encyclopedic overview of ant-Semitism in the Church, Carroll divides the subject into sections covering the New Testament origins of Jew hatred; Constantine, Augustine, and the Jews; from Crusades to conversionism; the Inquisition, enter racism; emancipation, revolution, and a new fear of Jews; the Church and Hitler; and a call for Vatican III.

Carroll, a novelist, tries to lighten this masterful mix of history, theology, politics, religion, and cultural criticism with relevant anecdotes from his own experiences including a troubling visit to Auschwitz, reminiscences of his life as a military brat in Germany, a childhood friendship with a Jew, a trip to Trier with his mother to witness a rare unveiling of the seamless Robe of Christ, and a pilgrimage to Jerusalem.

Many religious leaders within Catholicism fostered hatred of the Jews including the Roman Emperor Constantine, who transformed the cross into the sword; Thomas Aquinas, a medieval theologian who blamed the Jewish authorities for the death of Christ; Bernard of Clairvaux, who sanctioned violence against Jews during the Crusades; John of Chrysostom, who preached anti-Jewish sermons; Pope Paul IV, who set up a Jewish ghetto in Rome in 1555; and Pope Pius XII, whose early pact with Hitler is a low point in Catholic ecclesiastical history.

Carroll does identify a few heroes of the Christian faith who stand out for their openness to the Jews — Peter Abelard, Nicolaus of Cusa, John Henry Newman, and Pope John XXIII. In the closing pages of this monumental work, the author tries his own hand at suggesting reform with calls to excise anti-Jewish language from the New Testament, repentance by Catholics for crimes against the Jews, a restructuring of the church hierarchy, and a repeal of the doctrine of papal infallibility. 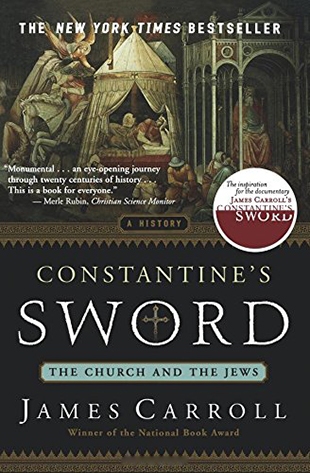