By Lama Marut
An out-of-the-box book on taming the ego.

Lama Marut (a.k.a Brian K. Smith) taught for more than two decades, first at Columbia University and later at the University of California until he retired in 2004. He has lived as a Buddhist monk for eight years and served as a spiritual teacher to students around the world. He is currently the spiritual director of eight Middle Way Centers located in North America, Australia, and Singapore.

In the preface to this out-of-the-box book, Lama Marut notes that many are seeking a meaningful existence outside traditional Christianity — or what used to be called that old time religion. They include spiritual mongrels who are exploring multiple traditions, the "nones" or religiously non-affiliated,; and what he calls the "undos" — "those of us who are trying to break free from the confines of religious labeling without jettisoning the helpful teachings and methods found in those traditions; they have dropped out churches and are just trying to be good human beings.

Here is Lama Marut's basic premise: "We're all desperately trying to be somebody. No one wants to be a loser, a small fry, a big zero, a washout, a nonentity. Nobody, it seems, wants to be just a nobody." Of course, our culture of consumerism and narcissism feeds this quest which results in perpetual ego-enhancement and compulsive self-consciousness.

For the author, the "Me Decade" has morphed into the "iERA" where social media and the information deluge have drawn out an "unprecedented exaltation of the ego and its insatiable need to be acknowledged, fulfilled, pampered, and 'liked.' " In four lively and creative sections of this paperback, Lama Marut examines the anxiety and stress in our lives brought on by selfishness and obsession with our individual identity.

Next, he looks at our efforts to make a better somebody through a variety of self-improvement programs and regimens. In "Losing the 'Somebody Self,' " Lama Marut challenges us to let go of the stories we are telling about ourselves and to reach out to others in love and compassion with "mindful unselfconsciousness." The final section deals with what life can be like as an "ordinary Joe."

While reading this paperback, we were reminded of Mahatma Gandhi who saw himself as a "zero" and spent most of his life putting others before himself in service. Here is a passage from Eknath Easwaran on this way of living:

"When Gandhi succeeded in taking off this mask and 'making himself a zero' through many years of living for others rather than himself, he found that what he had eliminated from his personality was only his separateness, his selfishness, his fear. What remained was the love and fearlessness that had been hidden there all the time."

That's what Lama Marut is aiming for in Be Nobody. 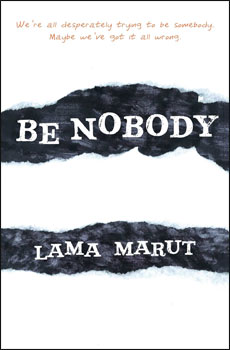