"Like the bees gathering honey from different flowers, the wise accept the essence of different scriptures and see only the good in all religions."
— Skimed Bhagvatam

The release of this monumental resource could not have come at a better time when more people than ever before are interested in learning more about the world's religions. Many of them are "spiritually independents" who want to access wisdom from many sources and are looking for practices that can enrich and deepen all aspects of their lives.

Under the editorial direction of Jack Miles, this two-volume set maps more than 1,000 primary texts from six of the world's religions. Miles is the Distinguished Professor of English and Religious Studies at the University of California at Irvine and author of the Pulitzer Prize-winning God: A Biography.

Volume I covers Hinduism, Buddhism, and Daoism. The Hinduism section is edited by Wendy Doniger, Mircea Eliade Distinguished Service Professor of the History of Religions at the University of Chicago and the American Council of Learned Societies' 2005 Haskins Prize lecturer. Buddhism is edited by Donald S. Lopez Jr., the Arthur E. Link Distinguished University Professor of Buddhist and Tibetan Studies and Chair of Asian Languages and Cultures at the University of Michigan). Daoism is edited by James Robson, Professor of East Asian Languages and Civilizations at Harvard University. All three have authored numerous books in their subject areas.

Volume 2 covers Judaism, Christianity, and Islam. The Judaism section is edited by David Biale, Emanuel Ringelbum Distinguished Professor of Jewish History at the University of California, Davis, and the director of U.C. Davis's Humanities Institute. Christianity is edited by Lawrence S. Cunningham, the John A. Brian Professor of Theology Emeritus at the University of Notre Dame. Islam is edited by Jane Dammen McAuliffe, past president at Bryn Mawr College and director of the John W. Kluge Center and Office of Scholarly Programs at the Library of Congress.

One-fifth of the American public — and a third of adults under 30 — do not identify themselves with a religion. This is a growth from 15% to 20% of the population in just five years, and we have no doubt that similar trends are happening around the world. Some of this number (6%) describe themselves as atheists or agnostics, and the other 14% say they have no particular religious affiliation. We've written about this group in our Spiritual Literacy Blog and why we call them "spiritually independent" rather than "Spiritual But Not Religious" and "Nones." In our experience, many of them are in fact deeply interested in the world's religions. They just don't confine their explorations to one in particular. For them, this two-volume set will provide hours of enrichment.

In the general introduction to this resource, titled "Art, Play, and the Comparative Study of Religion," Jack Miles reveals how in these six religions, spiritual practice is more important than anything else. Each presentation begins with a substantial overview of the tradition including its history, followed by a rigorous presentation of crucial and wide-ranging texts. This anthology also provides readers with selection headnotes, explanatory annotations, pronouncing glossaries, chronologies, maps, illustrations and bibliographies.

Here are some ideas for making the most of the materials from the six world religions in this two-volume guide-book:

• Use it as a catalyst to your own process of spiritual and personal growth as you read selections from the Hindu Bhagavad Gita on the path of devotion or the Buddhist Vimalakirti Sutra about the practice of skillful means.

• As you peruse through the pages of sacred texts, choose a few poems or readings to serve as a challenge to rediscover dimensions of faith you may have previously overlooked or underemphasized.

• Be on the lookout as you read selections from the Qur'an, the Bible, and the Tao Te Ching for opportunities to encounter the manifold mysteries of the Divine and of human nature.

• Think of the books as a chance to listen and learn from some of the great spiritual teachers of all time such as Jesus, Muhammad, Buddha, Lao Tzu, Rabindranath Tagore, and many others.

• Ponder the insights you pick up from selections on the history of the Protestant Revolution, the revival of Jewish life in Israel, and the variety of Buddhist communities around the world.

• Probe the religions which spark joy or wonder or meaning in your heart and set aside a special time to take in all the readings (for instance, there are 67 selections in Buddhism) on the religion you have chosen.

• Pick a spiritual practice from a religion you are not familiar with and try it out.

• Find passages from the world's religions that are the most inspirational and then share them with those closest to you. 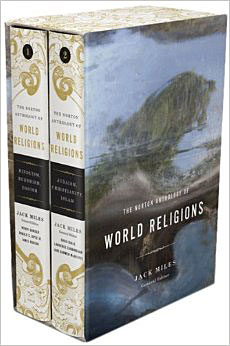