By Global Peace Initiative of Women
Spiritual teachers speaking in defense of the sacred seed and against genetically engineered seeds.

This spiritual resource has been brought into being as a tribute to Vandana Shiva, who has over the past 35 years dedicated herself to the protection of nature and the defense of people's rights to forests, biodiversity, water, and land. This environmental leader and activist has provided the introduction where she reflects upon the sacredness of the seed and the organization, Navdanya. she founded to reclaim the gift of the commons, of saving and sharing seeds.

Shiva contends that corporations have threatened the diversity of seeds by breeding them for chemicals or genetically engineering them. In the foreword, Dena Merriam, founder and convener of the Global Peace Initiative for Women, concurs with Shiva: "To manipulate nature's life energies is to directly harm Earth's ecological systems and human health. Hopefully the human community will pause, reflect and learn to treasure again the sacred gift of the natural seed, which when used wisely can provide for all the needs of the growing human family."

Filled with colorful photographs and brief essays by spiritual teachers from Judaism, Buddhism, Hinduism, Christianity, Feminine Spirituality, and Indigenous Wisdom, this paperback can be used as a spur to nurture your spiritual activism. Here are some quotes from the book:

• "In every seed lie the components of all life the world has known from all time to now."
— Swami Veda Bharati

• "A seed is small but rich with possibility, like love, which is as humble as it is powerful."
— Pir Zia Inayat-Khan

• "In every seed lie the components of all life the world has known from all time to now."
— Joan Chittister 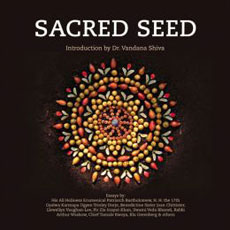