By Yossi Klein Halevi
A courageous, enlightening, and visionary work about building bridges between Jews, Christians, and Muslims in Israel.

Yossi Klein Halevi is a senior writer for the Jerusalem Report magazine and author of Memoirs of a Jewish Extremist. He has received numerous awards for journalistic excellence. This courageous, enlightening, and visionary work about making peace among the religions is a bridge-building masterwork offering a strong antidote to hatred and violence. The author, who describes himself as a religious Jew and a religious pluralist, writes: "For me, the test of whether a religion is true is its capacity to turn ordinary people into decent believers and extraordinary people into saints, whose presence affirms the reality of God."

In 1998, Halevi decided to make a pilgrimage — an attempt at religious empathy — by joining with Christian and Muslim neighbors in Israel during their devotions. As he notes: "Theology distinguishes between truth and untruth, prayer knows only different measures of depth." Halevi's interfaith adventures bring him in contact with Sheykh Ishak Idriss Sakouta, a Sufi one-man mission of religious peace; members of the Sisters of Zion, a Catholic group interested in bringing love for Judaism into the church; Sheykh Abdul-Hamid, a Sufi healer and exorcist, a spiritual leader with great heart; Sister Anna, a Christian dedicated to the spiritual practice of silence; Father Enza, an Armenian monk whose people, like Halevi's, suffered a holocaust; several nuns who are members of the Beatitudes, a Catholic community devoted to reconciliation with the Jews; Father Yaakov Willebrands, a Trappist monk/mediator trying to resolve the conflict between Jews and Arabs; and Sheykh Abdul-Rahim, a Sufi in the Gaza Strip committed to the service of God via hospitality and reverence.

At the Entrance to the Garden of Eden is filled with soul-stretching quotations, a treasure trove of devotional practices, and keen insights into the commonalities within the Jewish, Christian, and Muslim mystical traditions. Above all, this is a hopeful and healing book, the kind that comes along all too rarely in these times of contentiousness and adversarial conflict. Read it gratefully. 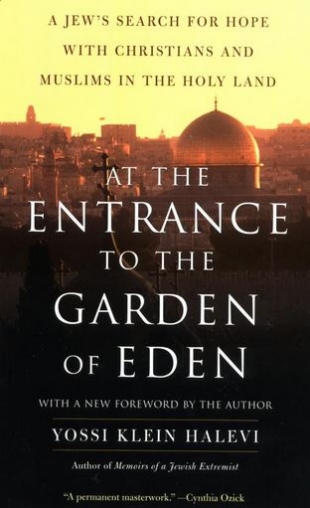