By His Holiness The Dalai Lama
A timely resource for anyone looking for guidance on the path of compassion.

In 1999, The Tibet Center and The Gere Foundation invited the Dalai Lama to New York City to give a series of talks at the Beacon Theatre and to speak in Central Park. Although he grounded his teachings on three ancient Buddhist texts, the Dalai Lama was able to reach out to listeners of all spiritual persuasions with his inspiring commentary on mind training, open heartedness, and living a life dedicated to serving others. As editor Nicholas Vreeland points out in the foreword to this collection of those talks, on the last day of his Holiness's visit, more than 200,000 people congregated in Central Park's East Meadow to hear him speak on his way of "transforming pride into humility and anger into love."

In this highly significant speech, the Dalai Lama points out that the concept of "us" and "them" is no longer relevant since we are all in this ongoing drama together. When there is trouble, dialogue is the way to go, not violence. And training in compassion and caring must start in the home. The Dalai Lama goes on to discuss the growing gap between the rich and the poor as an unhealthy situation that can be rectified by using "the dynamic methods of capitalism for making money and then distribute it in a more useful, meaningful way to others." He ends this speech with a poignant prayer for the happiness of all beings.

Elsewhere in An Open Heart, the Dalai Lama ponders meditation as a spiritual practice enabling individuals to tame the afflictive emotions of hatred, anger, attachment, and jealousy. "Developing wisdom," says the Dalai Lama, "is a process of bringing our minds into accordance with the way things really are."

With great finesse, this Tibetan Buddhist teacher delineates the art of cultivating compassion as developing empathy, closeness, and recognition of the nature of suffering. He holds up equanimity as the practice that enables us to reach out to others by transcending any feelings we have of discrimination and partiality. An Open Heart is a timely resource for anyone looking for guidance on the path of compassion. 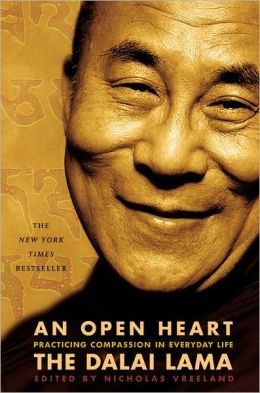