The American Soul Rediscovering the Wisdom of the Founders

By Jacob Needleman
Encourages all citizens to join in a most important task: to reimagine and bring to life the spiritual underpinnings of the republic.

Jacob Needleman is professor of philosophy at San Francisco State University and the author of Money and the Meaning of Life and many other books. With a keen sense of timeliness and an in-depth appreciation of American history and the plenitude of perennial wisdom, he has fashioned a soul-stirring work of conscience and discernment. This is one of the most trenchant works of spiritual literacy in years.

Needleman's remythologization of the idea of America taps into a mother lode of meanings that bolster and sustain democracy. At a time when a large portion of the world sees the United States as an aggressive, greedy, self-centered, and dangerous villain, Needleman teaches us how to revere the inner meaning of the republic.

"America was once the hope of the world. But what kind of hope? More than the hope of material prosperity, although that was part of it; and more than the promise of equality and liberty, although that, too, was an important part of it. And more than safety and security, precious as these things are. The deeper hope of America was its vision of what humanity is and can become — individually and in community. . . . America was once a great idea, and it is such ideas that move the world, that open the possibility of meaning in human life."

After briefly examining six American virtues and their shadows (including liberty, independence, and freedom of speech), Needleman focuses on the transcendent ideas and ideals of American icons who contributed to the soul of the nation: Benjamin Franklin, George Washington, Thomas Jefferson, Abraham Lincoln, Frederick Douglass, and Walt Whitman. Needleman explains: "It is this goal of bringing people together under the guidance of conscience that lies at the heart of the idea of democracy in its uniquely American form."

Of course, no exploration of the American soul is complete, honest, or relevant without an analysis of the destruction of its native peoples and the institution of slavery. The author writes: "These two massive crimes stand before us like the angels of Eden with their flaming swords. No entry to a new understanding is possible without confronting them. To a great extent, the material success of America rests on these crimes and others like them." Needleman points out the great paradox that Native American spirituality upholds the very same ideals that were cherished by the founders of the Republic. The author also shines in his portrait of the African American Frederick Douglass. He offered an inspiring vision of the ideals of liberty and justice at a time when so many of his people were being treated barbarously.

Although the Vietnam War broke the hearts of many Americans and nearly obliterated the essence of democracy, the author believes that the nation can still fulfill its destiny as "a community based on equality of all men and women who search for conscience." He insists that America must give up its illusion of uniqueness and realize it needs the help and goodwill of other nations to nurture interior freedom, service of others, and love of the great, good Earth.

Jacob Needleman's profound book encourages all citizens to join in an important task for our time — to reimagine and bring to life the spiritual underpinnings of the republic. 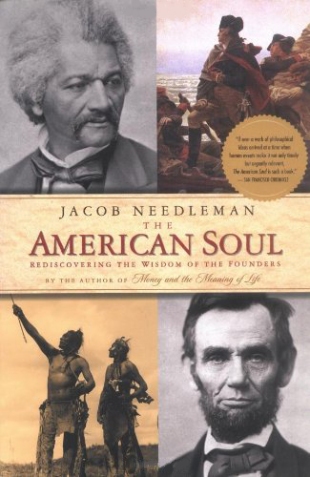