Stupid White Men & Other Sorry Excuses for the State of the Nation!

By Michael Moore
Savages the Bush Administration, the growing gap between the rich-and-the-poor, and the terrible things being done with our tax dollars.

Michael Moore is a trickster who likes shaking things up. His trailblazing documentary Roger and Me is the largest grossing nonfiction film ever made. He was the creator and host of the Emmy-winning series TV Nation and The Awful Truth. And his vituperative book Downsize This! was a New York Times bestseller. Now that George Bush is President ( "Idiot-In-Chief" is what Moore calls him), this muckraker has plenty of new material to further worry those those who feel we are living in terrible times.

How about this eye-opener for starters: "There is no recession, my friends. No downturn. No hard times. The rich are wallowing in the loot they've accumulated in the past two decades, and now they want to make sure you don't come a-lookin' for your piece of the pie." While the majority of citizens worry about more layoffs and the downsizing of their lifestyles, the richest 1 percent in the country have seen their wages increase by 157 percent. While low paid workers scramble to keep their households afloat with couples working around the clock to make ends meet, 44 of the top 82 companies in the United States did not pay the standard rate of 35 percent in taxes that corporations are expected to pay. In fact. 17 percent of them paid NO TAXES AT ALL. Now there's corporate welfare at its best, says Moore.

Checking out the chapter in the book devoted to what has resulted from Bush's first few months in office — well, it's enough to make the blood boil. Here are examples: Cut $39 million from federal spending on libraries. Rejected an international accord to enforce the 1972 treaty banning germ warfare. Cut $200 million from workforce training programs for dislocated workers. Cut half a billion dollars from the Environmental Protection Agency's budget. Moore then charts the corporate connections of the Bush cabinet (a few of the "stupid white men" of the title) and later sets out his own ideas on how to stage a countercoup.

At a time when patriotism is touted in the most obnoxious ways, Moore cuts to the core a American wrong-headedness by presenting a list of categories we have come out on top of all others. Whether writing about the low priority given education in America, the plight of people of color, or the continued slighting of women in a male dominated culture, Moore savages the state of the nation where ignorance and power are now cronies. An example: "The United States is now the only country besides Somalia that has not signed the United Nations Convention on the Rights of the Child. Why? Because it contains a provision prohibiting the execution of children under 18, and we want to remain free to execute our children. No other industrialized nation executes its children."

We are grateful to Moore for bringing to the fore the shadow side of the United States. Nothing could be more important at this point in American history. We need rituals for dealing with some of the travesties of our times, and here the wisdom traditions have much to offer. Reading Moore's critique of the Bush Administration led us not to rage but to some serious soul searching about our personal selfishness, greed, ignorance, and indifference to the genuine suffering of others. 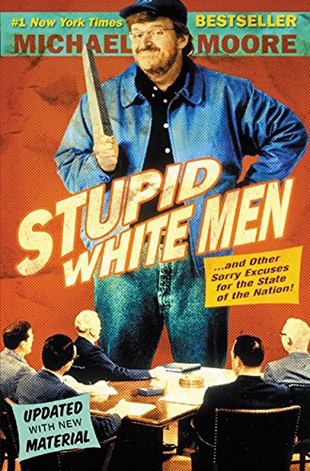