Prayer Notes to a Friend

By Edward Hays
Richly rewarding collection of devotional exercises for frisky Christians at play in fields of wonder.

Edward Hays, author of Prayers for a Domestic Church, Prayers for a Planetary Pilgrim, and 23 other books, has been a soul-stirring spiritual companion of ours for many years. We constantly turn to him for refreshment, for innovative rituals to do in the home or workplace, and for unusual ways of imagining prayer. We like to think of Hays as a trustworthy scout out ahead of the wagon train, searching for routes through new territory. Eventually, we'll all catch up to him along the paths he has mapped out for us. Then we can share stories around the campfire.

That's sort of what he has done in this richly rewarding book. In 60 brief chapters which Hays calls " prayer notes," he has come up with new and intriguing devotional exercises. He is as frisky and eclectic as ever bringing in material from other religious traditions and consistently trying to help us reframe our worn-out ideas about prayer.

One of the reasons we think of Hays as a soul companion is that we often find ourselves on the wave length. For instance, we just prepared an article on the sacred dimensions of water and then we read in his book: "The next time you drink a glass of water, take a shower or bath, or watch it rain, prayerfully ponder water as a vital image of your soul. Consciously use water as a soul symbol, so that even a simple drink of water will become a moist prayer of remembrance of your inner self."

There are so many helpful and meaningful devotional practices here! We're definitely going to take the Vow of Plenty—realizing that we just can't get enough of the Holy One and want more and more Mystery on our lives. We've already used some of the 99 Names of God mentioned in the Koran and are amazed at how these honorific titles perk up our prayer life. We'll be giving a test drive to the "hands on" prayer of "So help me, God" as we sit down in front of our computers. "The Prayer of the Eye" will come in handy at movie screenings when gazing is mandatory. Just last week, we tried out the "Bartender Prayer" by listening compassionately to a friend who is experiencing a loss of faith during some hard times. One of the most useful suggestions is the "Prayer of the Tongue" where Hays advises us to stifle critical or negative words. And finally, with fall and the cold season approaching, we'll definitely be trying out the practice of giving old medicine bottles a place of honor on our bathroom counter "as a disguised prayer shrine." We're guilty of not giving continual thanks to the Great Healer for the blessings of good health.

Prayer Notes to a Friend is filled with all the pizzazz and creativity we have come to expect from Edward Hays as the soul companion par excellence! At one point he observes: "An unexpected gift is really a double gift because it is received with more than usual gratitiude." Surprise your soul companions by giving them this treat as a gift. They'll be overjoyed and so will you. 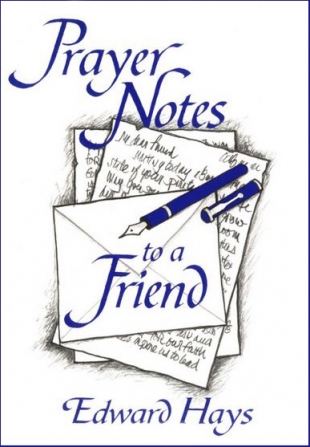