By Jackie Hardy
A wide-ranging collection that will definitely bring delight into your life.

Haiku is regarded by many as the supreme achievement of Zen culture. These three line poems usually focus on the delights and incongruities of the natural world. Jackie Hardy was the editor of Blithe Spirit, the journal of the British Haiku Society for six years. In this pleasure-inducing collection of 500 poems from Japan, the United States, England, and Canada, she mixes ancient and modern masters of the medium. In the introduction, Hardy writes: "With their infinite variety of subjects and images, haiku offer opportunities to experience things you could not otherwise 'know.' For the writer, haiku not only express a moment of insight, but a reconnection with that time when words were a talisman. For me, there is no wonder, then, that the haiku form is practiced around the globe. In their unique, small way, haiku show what it is to be human."

So many of the poems in this anthology are short poems with long echoes. A good haiku crams a great deal of experience into a few phrases and its reverberations swell out in all directions. No wonder there are said to be more than 800 groups in Japan writing and sharing haiku. And, as Hardy demonstrates with this collection, this is a literary form whose time has come in the West as well. The book is divided into five sections based on the five elements: wood (the spirit of initiation and the dawn), fire (the feverish activity of midsummer or midday), earth (the energy of the afternoon and the summer), metal (the season of autumn and the slowing down period of the evening), water (the restful time that is winter or the night).

In addition to an old classic such as the one by Boncho — "piled for burning / brushwood / starts to bud" — how about a modern one by Martin Lucas — "above the noise / of the motorway / wind in the poplars". Here's another example with a rare urban theme: "High above the city / dawn flares / from a window-washer's pail." And a favorite for all devotees of stones by Jim Kacian: "the cold night / comes out of the stones / all morning." We got a real bang out of one by Maurice Tasnier since we live in a loft and know the sounds described here: "chill night / first knocks / from the radiator." Savor and feel the reverberations of these haiku gems. This is a great gift book. 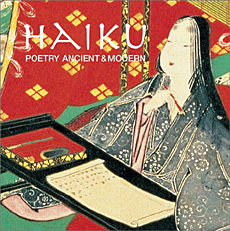