A Sideways Look at Time

By Jay Griffiths
A brilliant, inventive, and comprehensive masterwork of cultural criticism about spirituality and modern life.

In Sweden, a fellow pulled an emergency cord on a train and when it stopped, distributed leaflets saying: "Speed is an unnecessary evil that is destroying our lives and our planet." No doubt, most of the passengers were quite angry that he had slowed down their trip. But a growing number of people are speaking out against the fast pace of modern culture and our clock-dominated, linear, and work-oriented view of time.

This is just one anecdote in Jay Griffiths brilliant, inventive, and mind-boggling work. She has published in the London Review of Books, The Guardian, and Resurgence magazine, of which she is an associate editor. In thirteen chapters, Griffiths spins out a dazzling array of ideas, images, and facts on the cycles of nature; the colonizing of time by the Puritans, Sir Isaac Newton, Benjamin Franklin, and others; the local and ritual-rich time of indigenous peoples; the time-surveillance of businesses and corporations; the franticness of a 24/7 lifestyle; the relationship between power and time; the differences between men's and women's time; the tricking of time in mythic tales; and the facile attempts to enclose and control time through biotechnology, cloning, and cryogenics.

The author lifts up and praises the rambunctiousness of "wild time" that exists in the present moment (if we have eyes to see it), in the playfulness of children, in the idiosyncratic intuitions of women, in the zest of festivals, and in the anarchic milieu of wilderness. One of our favorite chapters contains a searing critique of the worship of speed in the Western world where we salivate over fast cars, fast food, fast talk, and fast books. We love her promotion of slowness as a corrective to the excessive swiftness of everything around us.

All the spiritual traditions call us to take time off to rest, be silent, savor the input of the senses, and be present in the Eternal Now. A Sideways Look At Time is one book you will want to let seep into your consciousness very slowly. Griffiths has created a masterwork that bears many readings. 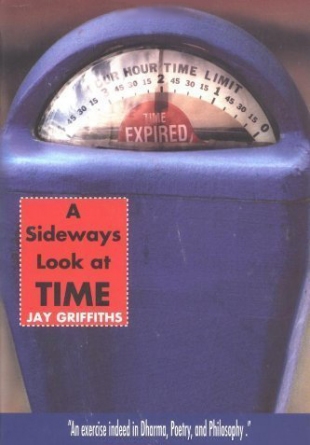