By Marianne Williamson
A classic text of the spiritual renaissance about our need to replace fear with love.

During the 1960s, Helen Schucman, a professor of psychology at Columbia University, was told by an inner voice to transcribe a three-volume work called A Course in Miracles. Before long study groups had formed all over the country to interpret this program of spiritual psychotherapy. This book is one teacher's interpretation of this document.

Marianne Williamson proclaims how the principles of Hell, God, You, Surrender, and Miracles form a spiritual practice with ramifications that give meaning to relationships, work, body, and Heaven. At the outset, she notes: "Love is what we were born with. Fear is what we learned here. The spiritual journey is the relinquishment, or unlearning, of fear and the acceptance of love back in our hearts." We can become miracle workers, according to Williamson, once we let our lives be unspooled in love. Living the good life has nothing to do with accumulating possessions or status or power. It has to do with serving others, expanding the fund of love in the universe.

Williamson believes that the positive messages of A Course in Miracles have special appeal to the Baby Boom generation which has expended far too much energy on fear, addiction, selfishness, and greed. A Return To Love, which was an almost instant bestseller when it was originally released and rose to the #1 slot on the New York Times list, is a landmark book in the spiritual renaissance of the 1990s and new millennium. It clearly has struck a chord by pointing the way to a spiritual path for a wayward prodigal generation. 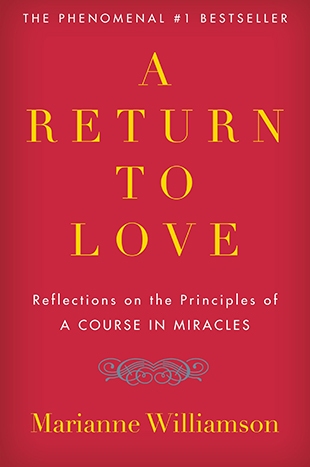