By David Niven
Up-to-date research findings on dating and marriage.

• "People who consider their partner conscientious, a person who consistently does what they say they are going to do, were 26% more likely to rate their relationship healthy and reported 41% less conflict in their relationship. Dependability was rated among the most desired qualities in a partner." (Watson, Hubbard & Wiese, 2000)

• "In studies of marriages of various lengths, couples with a high degree of intimacy between the husband and wife — that is, couples who shared their innermost thoughts — were 62% more likely to describe their marriage as happy." (Pallen, 2001)

• "In comparing couples who remained together more than five years with couples who split up, researchers found that couples who stayed together were 64% more likely to be able to identify multiple shared interests." (Bachand and Caron, 2001)

These are three of the findings reported in this fascinating paperback by psychologist David Niven, who currently teaches at Florida Atlantic University. He has gathered the most up-to-date data from more than a thousand scientific studies on relationships, dating, and marriage. Each finding is supported by a true story.

Here are some of the more interesting relationship themes covered in this paperback: it's the little things that matter most, don't let secrets eat you up, share housework, be willing to evolve, master your fears, don't compete, and accentuate the positive in all aspects of your life. 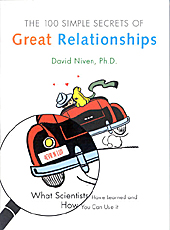