By William J. Elliott
27 diverse interviews with scholars, mystics, and evangelists that add meaning to the author's personal quest.

In his first book, Tying Rocks to Clouds: Meetings and Conversations with Wise and Spiritual People, William Elliott traveled around the globe and came back with 21 interviews. Dr. Elisabeth Kubler-Ross talked to him about death as graduation, Jean Houston shared what it means to be a citizen of the world, and Rabbi Zalman Schacter-Shalomi discussed humans as "theotropic beings who grow toward God."

For this ambitious volume, the author decides to go on a personal quest: "I am on a search to find the real Jesus, so that I can accept myself and forgive others. Jesus said, ' I no longer call you servants, because a servant does not know his master's business. Instead, I have called you friends, for everything that I learned from my Father I have made known to you.' In my search for Jesus, I'm looking for my friend, not my master. I want to meet a Jesus I can wrestle with. Someone to argue and fight with. Someone I can play with. A man I can love."

Although Elliott's Catholic faith was shattered when he lost both parents to death when he was 12 years old, he realizes that it was his understanding of Christianity that failed him, not Jesus. And so armed with a batch of questions about the man from Nazareth — what about his lost years? Did he mean to start Christianity or just bring some life into Judaism? Who killed Jesus and why? What about the Second Coming? — he sets out in his motor home and tries to make contact with people he considers to be in the know about Jesus. Many of the people he wants to talk to are unavailable. Others brush him aside. This bothers Elliott who admits to constant battles with doubts and fears of rejection. But there are grace moments — when Rabbi Harold Kushner remembers meeting him 11 years earlier in New York or when Andrew Harvey tells him that this project is "incredibly important" or when a wealthy man gives Elliott the money he needs to finish the book.

The author succeeds in getting 27 interviews with a varied group including Marcus Borg, Deepak Chopra, John Dominic Crossan, Matthew Fox, Thomas Keating, Mary Morrissey, John Shelby Spong, Marianne Williamson, and N. T. Wright. Jerry Falwell prays with Elliott after the interview, and Billy Graham thanks the author for sharing his story. "I've met with scholars, mystics and evangelists," Elliott notes. "Those three groups keep each other honest. Scholars seek Truth. Mystics seek the experience of God. Evangelists seek to understand, protect, and respect God's word. All of them together keep each other honest." Hats off to Elliott for bringing these diverse parties to the same table. The result is a multidimensional feast of material on Jesus.

On the road, the inquisitive author draws closer to Jesus while reading the Bible, thinking about him, even having intimate conversations with him. He travels to Jerusalem to walk where Jesus walked and in the Garden of Gethsemane he actually weeps. By the end of his quest, the author's heart opens wide to Jesus, and he realizes the journey has been edifying and personally rewarding. You may feel that way at the end as well. 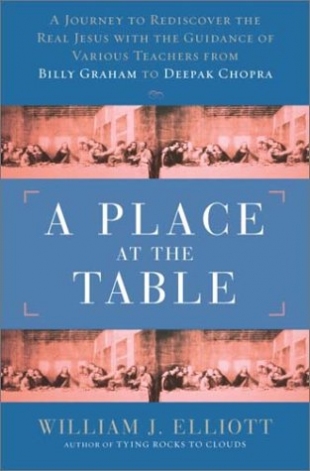