Heart of Forgiveness A Practical Path to Healing

By Madeline Ko-I Bastis
Demonstrates the transformative powers of this spiritual practice.

Madeline Ko-I Bastis was the first ordained Buddhist priest to be certified as a hospital chaplain. She is the founder of Peaceful Dwelling, an organization devoted to teaching meditation techniques for healing in Long Island, New York. She notes: "During my work with cancer, AIDS, psychiatric, and Alzheimer's patients; with battered women, caregivers, jail inmates, addicts, as well as so-called normal people, I have found that nothing is more difficult than forgiveness. Some people cannot ask for forgiveness, some cannot forgive another, some of us don't even realize that we are our own harshest judge and withhold forgiveness from ourselves." Each chapter in this handy paperback includes healing stories about this difficult spiritual practice, a meditation, guided imagery, and other relevant exercises.

The book is organized around three key forgiveness practices:

Madeline Ko-i Bastis is convinced that greed, anger and ignorance bring much pain into the world as we seek to please ourselves at the expense of others. There is a great deal of rage afoot in society. She shares this example: "After the Columbine massacre, members of a local church planted 15 linden trees as a memorial to the 15 people who had been killed — the 13 victims and two shooters. A couple of weeks later, while onlookers cheered, some parents of the dead children marked 13 trees with the names of the victims and chopped down the remaining two that represented the killers." Such fierce anger squeezes all room for forgiveness out of our hearts.

Joy is a powerful antidote to the harm around us: "When we experience joy, the positive energy radiates from every pore. It's like being a fairy godmother with a magic wand. Everyone we touch is infected with well-being and that well-being spreads throughout the community. When there is joy there is no room for harmful thoughts, words or actions." Joy and gratitude make a space for forgiveness in our hearts.

Try a Spiritual Practice on Nurturing 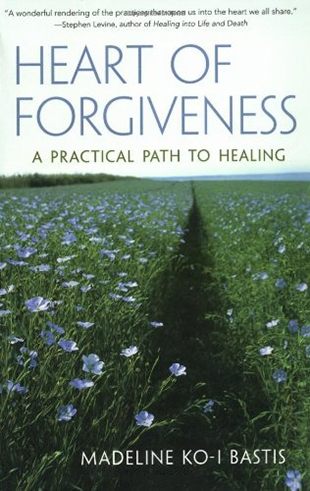