Destructive Emotions: How Can We Overcome Them? A Scientific Dialogue with the Dalai Lama

By Daniel Goleman
Will appeal to scholars and spiritual practitioners of meditation and mind training exercises.

In a Nutshell: This fascinating volume covers the proceedings at the Seventh Mind and Life Conference that took place in Dharamasala, India, for five days in March 2000. The Dalai Lama and other Buddhist scholars met with Western scientists and philosophers to discuss destructive emotions, feelings in everyday life, windows into the brain, mastering emotional skills, and reasons for optimism.

Sum and Substance: Destructive emotions such as anger and hatred are convulsing the private and public lives of people around the world. These out-of-control emotions muscle their way into the human mind and heart, pushing aside more healing emotions such as empathy, compassion and peace.

During this conference, the Dalai Lama and other Buddhist practitioners discuss mind training exercises that are capable of transforming these destructive emotions. Scientists from a wide variety of perspectives add their ideas, findings, and strategies. Owen Flanagan, a philosopher of mind at Duke University, presents a Western overview of destructive emotions; Matthieu Ricard, a Tibetan Buddhist monk, discusses how these emotions do harm to ourselves and others; the Venerable Ajahn Maha Somchai Kusalacitto from Bangkok chimes in with the Theravadan perspective; Paul Ekman, a psychologist at the University of California at San Francisco and a world expert on the facial expression of affect, examines the ways in which destructive emotions are part of the evolutionary quest for survival; Mark Greenberg, a psychologist at the University of Pennsylvania, shares some of the emotional literacy programs he has established for children; and Francisco Varela ponders the melding of experiential knowledge of Buddhism with Western scientific methodologies to explore consciousness and emotions. The material covered here will be of interest to scholars and spiritual practitioners of meditation and other mind training exercises.

A Teaching Story: Matthieu Ricard shares a Buddhist path of directing every conscious thought toward the goal of cultivating compassion:

"These practices are sometimes quite difficult. In the sutras. it explains how to do that in every single gesture, When getting up, one thinks,'May I deliver all sentient beings from suffering.' When tying one's belt, one thinks, 'May I cultivate the belt of mindfulness.' When coming down the steps, 'May I go down again to take beings from suffering.' When opening a door,'May the door of liberation suffering be closed for sentient beings.' In that way, every instant is filled with the thought of compassion. Compassion is bound to become part of your mind stream."

"I think the practice of compassion is like a medication that restores serenity when one is very agitated. The great tranquilizer is compassion." (The Dalai Lama)

"If you read the Declaration of Human Rights, there are fifty-eight or so articles. But in our dealings with others, it seems that one basic article that could define human rights is to recognize that others want to be happy just as much as we do. As much as don't want to suffer, neither do others. Therefore, they have exactly the same rights because their wish is the same as ours. That summarizes the whole Declaration of Human Rights." (Matthieu Ricard)

"My hatred for Hitler could motivate me to dedicate my life to overcoming bigotry and violence. Hatred, need not, in my thinking, lead to self-destructive behavior, nor to behavior that is motivated to destroy the other person." (Paul Ekman)

If You Like This Book, You'll Also Want to Read . .
• Freeing the Soul from Fear by Robert Sardello
• Healing Anger by the Dalai Lama
• Healing through the Dark Emotions by Miriam Greenspan
• Working with Anger by Thubten Chodron

Try a Spiritual Practice on Compassion 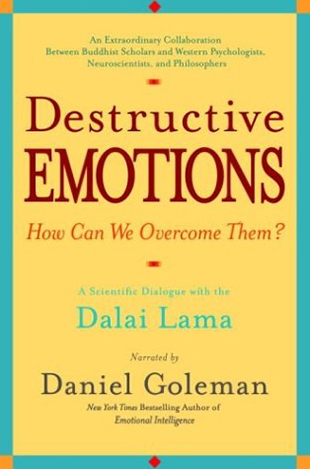