By Abdul Ali Hamid, Imam al-Bukhari
A treasure-trove of Hadish sayings about etiquette and good conduct in every area of daily life.

For this insightful and illuminating volume in the Sacred Literature Series of the International Sacred Literature Trust, translator Dr. Abdul Ali Hamid has made a selection of the teachings of the Prophet collected under the title al-Adab al-mufrad — meaning "good behavior singled out" — gathered by Imam al-Bukhari in the ninth century CE. Hamid teaches at the Muslim College in London and is an authority on Arabic language and literature. In the introduction, he points out that Muhammad lived a full and rich social life with a family, wives, and children, and he was an experienced ruler and judge. His teachings were not limited to religious ideas; he also left behind a wide variety of sayings on good conduct in everyday life. The Messenger declared: "I have been sent to perfect the noble character." Another time, he said: "The most perfect of the believers in the faith is the one who behaves best." Dignity and thoughtfulness in interpersonal relationships are very important.

The Islamic code of conduct is divided into three categories: Duties towards those with whom a person lives (such as being kind to parents, helping others, supporting the needy and the poor); good conduct (actions that please Allah and all creatures along with noble attributes such as sincerity, generosity, and modesty); and etiquette to be observed in daily routines (such as while sleeping, eating, talking and walking).

High regard for neighbors and other members of the community is demonstrated with the following account:

"Abu Barzah al-Aslami related that he said: 'O Messenger of Allah, tell me of a deed that will lead me to Paradise.' The Prophet (Peace and blessing of Allah be upon him) said: 'Remove harmful objects from someone's path.'

"Abu Hurayrah stated that the Prophet (Peace and blessing of Allah be upon him) said: 'A man came across a thorn in the way, and he said to himself: 'I must remove this thorn so that no other Muslim is hurt by it.' For that he was shown mercy (by Allah)."

The next story vividly illustrates the humanity of Muhammad and his belief in the value of having a cheerful nature.

"Mu'adh b. 'Abdullah b. Habib al-Juhani heard the following from his father and uncle.

"Allah's Messenger (Peace and blessing of Allah be upon him) came out one day to the Companions looking very cheerful and as though he had just had a bath. They thought he must have had intercourse with his wife and said to him: 'Messenger of Allah! You are looking happy.' He said: 'Yes, and praise be to Allah.' Then the subject of wealth was mentioned and the Messenger of Allah (Peace and blessing of Allah be upon him) said: 'There is nothing wrong with wealth for someone who is mindful of Allah. However, good health for such a person is better than wealth, and a cheerful disposition is a gift (from Allah).' "

In the Western world, manners and etiquette have been severed from religion. We can learn from Muslims the importance of adab, good behavior, in our relations with those close at hand and with strangers. In these stories, Muhammad demonstrates a tenderness and a sensitivity to others in his actions. In one, he comes in at night, greeting people "in a voice soft enough not to wake those who were sleeping but audible by those who were awake." Such loving attention to details in human relations is the mark of true spirituality. 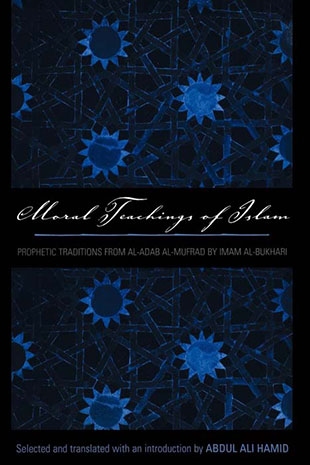