By Vladimir Radunsky
A quaint and entertaining tale of peacemaking based on a true story.

Benjamin Franklin once quipped, "There never was a good war or a bad peace." Only trouble is that violence flares all over the place, and there are very few people who are willing to do something positive to put out the flames.

Here's a marvelously quaint tale about a little boy who was living happily in a small beautiful town. But then war came, and people were fighting everywhere, day and night. The little boy's mother was no longer kissing him and his father wasn't there to play with him all day. He called for them but all he heard was the bang-bang, boom-boom, cling-clang of war.

The little boy needed his parents — and he also needed to pee! In fact, he peed all over the fighting. He couldn't help it — after all, he was just a little boy. And the people started laughing. They laughed so hard, they quit fighting.

The townsfolk were so grateful that they created a statue to commemorate the heroic peacemaking effort of the little boy and called it "Manneken Pis," meaning "peeing boy." This wonderfully eccentric tale, based on a true story, makes the valid point that you're never too young or too small to be a peacemaker. 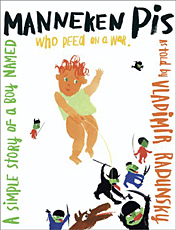