By Ann Smith, Elizabeth Rankin Geitz, Marjorie A. Burke
A wide range of devotional material touching on many aspects of the lives and work of women.

This paperback, edited by Elizabeth Rankin Geitz, Marjorie A. Burke, and Ann Smith, was assembled under the auspices of the Council of Women's Ministry/Domestic and Foreign Missionary Society of the Protestant Episcopal Church U.S.A. It is divided into chapters on Identity, Daily Life, Stages of Life, Spirituality, Ministry, Seasonal Prayers, and Corporate Prayers.

This devotional material touches upon many aspects of the lives and work of women. For example, there are prayers on facing an operation, on going to a wedding reception alone, comfort when the pregnancy test is negative, in celebration of childbirth, menarche bewilderment, golden wedding anniversary, for lay ministers, for activist insomniacs, for unsafe neighborhoods, for a child who has been molested, and for unity in the church. We were especially impressed with "A Prayer after the Oklahoma City Bombing" by the Rev. Margaret Bullitt-Jonas and "Prayer in Time of War" by Wendy Lyons. 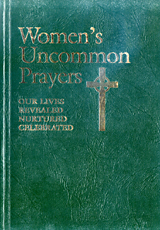