Lamentations From New York to Kabul and Beyond

By Daniel Berrigan
A cry from the heart of this peacemaker against the furies of war and the enmity that is driving America into isolation and a sea of troubles.

How lonely sits the city
that once was full of people!
How like a widow she has become,
she that was great among the nations!
She that was a princess among the provinces
has become a vassal.

She weeps bitterly in the night,
with tears on her cheeks;
among all her lovers
she has no one to comfort her;
all her friends have dealt
treacherously with her,
they have become her enemies.
(Lamentations 1:1-2)

"In 2001, I turned eighty," writes Daniel Berrigan, the Jesuit priest, poet, peace activist, and author of Job: And Death No Dominion, along with many other books. "That same year, the twin towers fell in Manhattan, and another American saga of revenge opened. The state mobilized mightily, the Church fell in line. . . . The world has fallen to a brutal scramble, more atrocious, more thwarting to sane understanding than when we began the work of peacemaking."

Little did Berrigan know when he wrote this fiery commentary on the book of Lamentations in the Bible that it would be newly published when the United States went to war with Iraq and bombed the ancient city of Baghdad with a "shock and awe" show of military might. Berrigan begins his analogies months earlier.

The situation of the Jews after the fall of Jerusalem mirrors the plight of Americans after September 11 when people were wailing in grief over the loss of life and the discovery of their vulnerability to the forces of hatred. In Lamentations, there is disbelief over the Temple reduced to rubble, the city sacked, noncombatants murdered, and survivors sent into exile. Why did this happen? How could God treat us this way? The poet, then and now, answers: Because we sinned. And the offense: idolatry.

Berrigan steps back from the biblical text and shines its light on the revenge war in Afghanistan where the richest nation on Earth pulverized one of the weakest and poorest countries with smart bombs, rockets, tanks, and land mines. Of course, children died by the thousands but they were only seen as "collateral damage." Civilians always die in wars, he observes: "War permits two categories of humans, two only: warrior and vanquished. Or another duet: survivors and the dead."

Berrigan sees the American lust for power, money, and domination as a trinity of false gods who throw darkness on the face of the Holy One. What was done in Afghanistan is repeated in Iraq, with more might and firepower. But there is an alternative. Berrigan praises the gospel ethic of loving your enemies and practicing compassion. He salutes peace as a precious treasure worth so much more than all the furies of war.

Dan Berrigan is still going strong with not an ounce of his righteous indignation diminished. This book is a cry from the heart of this peacemaker against the furies of violence that is driving America into isolation and a sea of troubles. This priest and poet has been faithful for a lifetime to the noble cause of justice and nonviolence. He is a true prophet and seer. With this prescription for the health and well-being of the planet, he joins the company of other revered elders who see no good coming from the ancient scourges of enmity and warfare. May the younger generations heed his call. 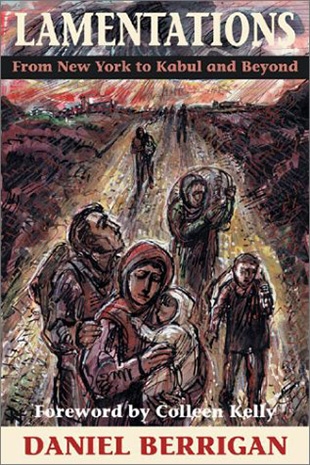