Buddhist Tantra Teachings and Practices for Touching Enlightenment with the Body

By Reginald A. Ray
Buddhist Tantra: Teachings and Practices For Touching Enlightenment With the Body by Reginald A. Ray examines this rigorous tradition with its many practices aimed at self-transformation.

Reginald A. Ray is a professor of Buddhist studies at Naropa University in Boulder, Colorado. He is an acharya in the lineage of Chogyam Trungpa and serves as teacher-in-residence at the Shambhala Mountain Center in Red Feather Lakes, Colorado.

Buddhist tantra originated in seventh century India and then spread into Tibet. The word "tantra" means "to weave through," a metaphor that touches upon the aspects of our deeper self expressed in all that we say or do. Although tantra has been shrouded in mystery and secrecy, the teachings are now being transmitted to a wider group of people then ever before. Many realized masters believe that this tradition has a great deal to say to those who long for a fuller and richer state of being.

Ray begins these 18 sessions with an overview of the six elements of Buddhist tantra. This provides a map for the journey. First is an emphasis upon direct experience. These teachings and meditations are not head trips but practices that speak to the feelings and intuition, two faculties that remain poorly developed in twenty-first century urban dwellers. Second, this path is non-theistic, emphasizing energies that lie within rather than outside of us.

Third, Buddhist tantra focuses on the body, which is seen as a temple of enlightenment. Sexuality and desire have their roles to play in tantric practice. The Buddhist saint Saraha once said: "Within my body are all the sacred places of the world and the most profound pilgrimage that I can ever make is within my own body." Fourth, the feminine is honored in this tradition, and both sexes strive to balance the masculine and the feminine energies within. Fifth, Buddhist tantra aims to awaken us to the sacredness of all life — the natural world, animals, and our communities. The entire world is alive, vibrant, and intelligent. And sixth, this path promotes an expansive nature of reality that goes far beyond the stunted limitations of the status quo.

Included on this eleven and one-quarter hour of material are six complete guided meditations on prana breathing, body awareness, abdominal breathing, earth breathing, and exploring the nature of awareness itself. Ray also presents practices for working with your subtle body to release karmic blockages and advanced practices for invoking the support of deities, spiritual energies, and eternal buddhas. Whether talking about the role of the spiritual teacher as "the dangerous friend" or elucidating the three commitments to self, others and the sacred world; Ray proves himself to be a sensitive interpreter of this ancient tradition. 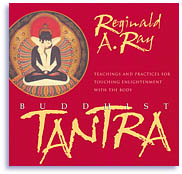