By Pir Vilayat Inayat Khan
A soul-stirring gathering of Sufi wisdom for the ages.

Pir Vilayat Inayat Khan belongs to the succession of Sufi Pirs of the Silsilah, the spiritual transmission of the Chishti Sufi Order of Ajmer, India. The eldest son of Pir-o-Murshid Inayat Khan, who brought Sufism to the West, Pir Vilayat succeeded his father as head of the Sufi Order in 1956 and established the Sufi Order in the United States ten years later. He is the author of many books, including Awakening: A Sufi Experience. He currently lives in France and the United States.

In this luxuriously designed volume filled with Islamic art and inspirational portraits of Sufi mystics by his wife Mary, Pir Vilayat has created a spiritual masterwork. Through his imagination he has convened a conference in which he is both a participant and a narrator. Sufi seers from many different times and countries discuss the matters close to their hearts. Sufi dervishes raise some common questions, and the various teachers respond.

Although these discussions do not proffer the official views of any wing of Sufi thought, they do provide a wonderful overview of mystical insights and aphorisms. As Pir Vilayat states early in the proceedings: "The human mind enjoys wandering in other dimensions where it escapes being forcibly fitted into the simplistic logical practices of the commonplace thinking of our ancestral civilizations, which pigeonholes human experience into discrete categories."

Hazrat Inayat Khan, who called the Sufi message "spiritual freedom" when he introduced it in the West, sets the tone for this conference: "Man can reach God only as far as his imagination can take him. Make God as great and as perfect as your imagination can. By making God great we ourselves arrive at a certain greatness; our vision widens, our thought deepens, our ideals reach higher. We create a greater vision, a wider horizon, for our own expansion. By way of prayer, by praise, by contemplation, we should therefore imagine God as great as we possibly can." This collection of sacred explorations is organized into chapters on light, asceticism, creativity, transcendence, glorification, the galaxies, and other subjects.

It is such a delight to be tutored by such a revered company of teachers. Baba Kuhi describes a style of everyday spirituality that could be practiced today:

The same spirit comes across in the following by Jami:

Awakening for these Sufis means being able to see from a divine point of view, and this high and holy vocation is open to all. Many of the more poignant passages in the book revolve around the divinity residing in humanity and the ways it can be brought into fruition. As Pir Vilayat puts it:

"All that we have gone through together in this great conference, all that humanity has been moving toward, albeit awkwardly, culminates in your slogan 'Make God a reality.' But the crux of the question is how to embody the divine power that bursts through when identifying with one's higher self — the divine dimension of one's being — without bloating one's personal ego." Hazrat Inayat then chimes in: "One must honor the aristocracy of one's soul together with the democracy of one's ego."

Most of the Sufi mystics here would agree, including Rumi, Ibn 'Arabi, Attar, Bastami, Hafiz, Hallaj, Shems of Tabriz, and the fifty others, all identified with brief biographies at the back of the book. In Search of the Hidden Treasure is a soul-stirring gathering of Sufi wisdom for the ages. 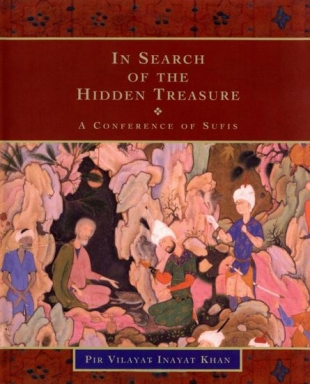