The Secret Life of Bees

By Sue Monk Kidd
A heart-affecting novel about a young girl's coming of age through the transforming power of love.

Fourteen-year-old Lily Owens lives on a South Carolina peach farm with her irresponsible and violent father. She vaguely remembers the day ten years earlier when her mother died tragically due to a gun accident. She has a few of her things in a tin box buried in the orchard: a picture, a pair of gloves, and a wooden picture of a black Virgin Mary with "Tiburon, S.C." written on the back. When her yearning for a mother gets too much for her, Lily digs up her treasures and contemplates what they could mean.

Her only real companion is Rosaleen, an African-American who takes care of the house and looks after her. One summer afternoon in 1964, this proud woman decides to exercise her newly won right to register to vote. Three of the town's most vehement racists attack her, and when Rosaleen fights back, she is arrested and put in jail. With the bravado of youth and the realization that she has nothing to lose and everything to gain by leaving home, Lily springs her nanny from jail and together they set out for the only destination Lily can think of — Tiburon.

Arriving there worn out and hungry, Lily goes into a small market to buy some food. There on a honey jar label she spots the same black Madonna picture she has from her mother. The honey is made locally, so she decides to visit the beekeepers, three black sisters, August, June, and May Boatright. Used to providing shelter and sanctuary for those who need help, they take the two travelers in. Whereas June doesn't believe Lily's story about being on her way to live with an aunt in Richmond, August is much more patient, realizing that this troubled young girl will reveal what is in her heart in her own good time. Lily wants to ask if they know anything about her mother, but she's not sure how to bring the subject up or even if she really wants to know.

Lily soon is helping out with the beekeeping while Rosaleen works in the kitchen. They are befriended by May, an extremely sensitive soul who must periodically retreat to a wailing wall in the woods to cope with the pain she feels inside for others. The sisters also have a community of women, the Daughters of Mary, who meet regularly at their house for prayers around a large statue of the Virgin Mary they call "Our Lady in Chains." Protected by the sisters and this community of women, Lily gradually feels empowered to deal with the story of her mother.

Sue Monk Kidd is the author of two spiritual memoirs, The Dance of the Dissident Daughter and When The Heart Waits. In this New York Times bestseller, she explores in very touching and imaginative ways the spiritual power of nurturing, love, faith, and self-acceptance. When she first recognizes the black Mary on the honey jar, Lily observes: "I realized it for the first time in my life: there is nothing but mystery in the world, how it hides behind the fabric of our poor, browbeat days, shining brightly, and we don't even know it." While under the sensitive care of August and the other women who love the Black Madonna, this teenager experiences one mystery after another as she opens up to the grace that infuses her life.

One Friday evening after prayers, August takes her outside to the bee yard. Lily describes what she learns there: "I hadn't been out to the hives before, so to start off she gave me a lesson in what she called 'bee yard etiquette.' She reminded me that the world was one really big bee yard, and the same rules worked fine in both places: Don't be afraid, as no life-loving bee wants to sting you. Still, don't be an idiot; wear long sleeves and long pants. Don't swat. Don't even think about swatting. If you feel angry, whistle. Anger agitates, while whistling melts a bee's temper. Act like you know what you're doing, even if you don't. Above all, send the bees love. Every little thing wants to be loved." This passage vividly conveys the artistry and the spiritual perspective of Sue Monk Kidd. This story, like all her writing, is characterized by a keen reverence for the healing and transforming power of love. 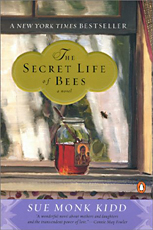