By Farnoosh Moshiri
A riveting novel set in Teheran in 1983 about a teenage girl who is arrested, imprisoned, and tortured by militant members of the regime of the Ayatollah Khomeini.

On a day that starts out like all other days, a seventeen-year-old Iranian girl is arrested at her home and taken to a jail that once was a bathhouse. Those who take her, her brother Hamid, and his pregnant wife are loyal members of the Khomeini regime who are determined to stamp out intellectuals, secularists, and all those unsympathetic to the Islamic republic. The vehemence of their hatred comes through in the epithets they spew at the prisoners — traitor, bitch, little bastard, devil, and Satan worshipper. Those in charge of the women lead them around by leashes, considering them to be untouchables. There are rumors among the inmates that virgins are raped before being executed so they will be denied heaven and will go to hell.

Although the imprisoned narrator's parents both died in an automobile crash years ago, those in charge of the interrogations know that her father taught in a university and was not a traditional Muslim. They also suspect that her brother is a political activist. The struggle to keep her composure and to survive become of paramount value. She is clubbed during interrogations, forced to stand all night blindfolded, and punished when she feeds the hungry infant of another lady. One of the rituals that brings solace to her soul is remembering what Hamid told her as a child: "Whenever I have a bad pain, or a serious problem, I just think about the universe. How vast it is. And how small I am."

There is a solidarity among the women prisoners who help each other as best they can, despite being repeatedly tortured and starved. A professor recites a poem, a doctor tries to help her mother, and they all try to console the high school girls who are really depressed when their heads are shaved. Pregnant women or those with children usually repent, confess their sins, and don the black veil in order to save their loved ones. They are called "ravens" and given privileges but not let free.

This riveting novel by Farnoosh Moshiri belongs in the small circle of great literature about prison experiences. The author was born into a literary family in Tehran; she earned a master's degree in drama from the University of Iowa and then returned to Iran in 1979. When the Ayatollah Khomeini began a campaign against all perceived enemies of the Islamic republic in 1983, Moshiro lost her job and escaped with her two-year-old son. She currently teaches at Montgomery College in Houston, Texas. The incidents in The Bathhouse are based on interviews with victims of Khomeini's repressive regime. 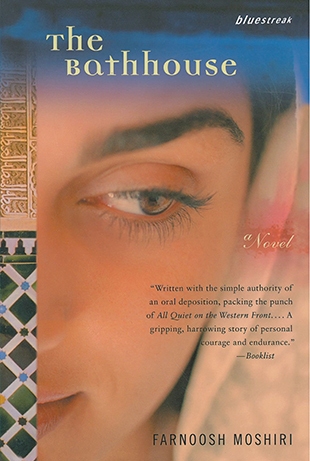