The Spiritual Practices of Rumi Radical Techniques for Beholding the Divine

By Will Johnson
An overview of this pathway to ecstatic union with the Divine.

Will Johnson is founder and director of the Institute for Embodiment Training, which combines Western somatic practices with Eastern meditation techniques. He is the author Aligned, Relaxed, Resilient: The Physical Foundations of Mindfulness and several other books. In this profound work, Johnson discusses the practice of beholding the divine through gazing at another person.

He begins with a description of the use of icons by Eastern Orthodox believers who go on retreats with pictures of saints for deep meditation and communion with God. Many devout Hindus have shrines in their homes where they look upon the image of a god or goddess and draw closer to the Divine. In the same tradition, the darshan between a guru and a devotee can be very powerful and filled with love and meaning. Or as Ramana Maharshi once put it: "When the eyes of the student meet the gaze of the teacher, words of instruction are no longer necessary."

Johnson is convinced that since the eyes are universally seen as the windows of the soul, "when we hold the gaze of another, we hold and cradle his or her soul." Anyone who has spent time peering into the eyes of newborn children knows exactly what he is talking about. Young lovers also find themselves gazing into the eyes of their beloved for long periods of time. These examples pale in comparison to the main subject of this extraordinary book — the intentional gazing practice of the thirteenth century Sufi poet and seer Rumi and his controversial teacher Shams-i-Tabriz. Johnson believes that behind closed doors, these two spiritual friends were able to achieve an ecstatic union with the Beloved as the barriers between them were obliterated and they opened to grace.

Johnson uses Rumi's poetry to explore this mysterious and exhilarating process of dying into love. Certainly one of the most interesting dimensions of the gazing practice is that it is done through the vehicle of the body. Or as Rumi puts it: "The patron of your eyes is God, / Who is always alive and creating constantly." What a wonderful image! The author, feeling inspired, comes up with one that is equally imaginative: "Gazing at the beloved is a practice of surrender in tandem, a bicycle to God built for two."

In his commentary on gazing at the Beloved, the author discusses the language of the heart, the birthing river of darkness and light, laughter, and learning to see. These lines by Rumi say it all: "If you want to know God, / Then turn your face toward your friend, / And don't look away." Johnson ends on a high note with a poem by Hafiz about gazing at the Beloved.

Try a Spiritual Practice on Unity 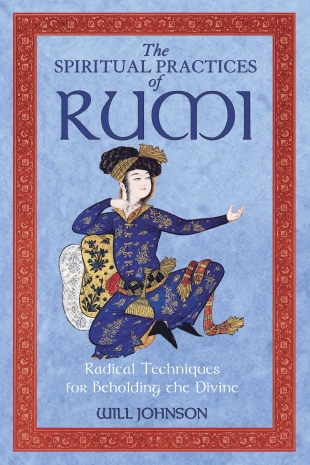