Life of Pi A Novel

By Yann Martel
An enthralling novel about a boy's coming-of-age, a fascinating portrait of human-animal interactions, a mystical journey of multifaith exploration, and a celebration of storytelling and the versatility of the imagination.

Pi Patel is the son of a zookeeper in Pondicherry, India. He was given the full name of Piscine Molitor after a Parisian swimming pool frequented by a family friend. But when kids at school took to calling him Pissing, he shortened it to Pi, that familiar figure for the ratio of a circle's circumference divided by its diameter. At one point he says: "And so in that Greek letter that looks like a shack with a corrugated roof, in that elusive, irrational number with which scientists try to understand the universe, I found refuge."

Although occasionally uncomfortable at school, Pi is incredibly happy at home surrounded by a veritable wonderland. He learns that the zoo animals live by habit and, once their basic needs are met, are content to repeat the same rhythms and rituals every day. Change the routine in the slightest way, however, and the animal will express confusion, anger, or retreat into a safe place. He grows up knowing not to anthropomorphize — assign human characteristics — to the animals. In one very scary scene, Pi's father demonstrates than animals are ferocious beasts who are driven by their hungers and passions. He also teaches the boy about how a circus animal trainer is able to control large animals by assuming the position of the alpha male, demonstrating dominance and an ability to provide for their needs.

Pi's parents are secularists with no interest in religion. This teenager, who is a Hindu, finds himself also attracted to Christianity and Islam. Although he thinks that Jesus' ministry can't hold a candle to the exotic adventures of Hindu gods, his message of love seems very important. He begins to meet regularly with a Catholic priest and soon asks to be baptized. Pi finds Islam to be "a beautiful religion of brotherhood and devotion." After meeting a Sufi mystic in the market, he puts a prayer rug in the garden facing Mecca and prays five times a day. However, once the local leaders of each religion discover what he is doing, they try to convince Pi that he must choose one over the others. But this ardent teenager refuses to give up his multifaith path of loving God.

All of this spiritual practice leads to a mystical experience which he describes this way: "I left town and on my way back, at a point where the land was high and I could see the sea to my left and down the road a long ways, I suddenly felt I was in heaven. The spot was in fact no different from when I had passed it not long before, but my way of seeing it had changed. The feeling, a paradoxical mix of pulsing energy and profound peace, was intense and blissful. Whereas before the road, the sea, the trees, the air, the sun all spoke differently to me, now they spoke one language of unity. Tree took account of road, which was aware of air, which was mindful of sea, which shared things with sun. Every element lived in harmonious relation with its neighbour, and all was kith and kin. I knelt a mortal; I rose an immortal. I felt like the centre of a small circle, coinciding with the centre of a much larger one. Atman had met Allah."

When Pi's father decides to leave India and move to Winnipeg, Canada, he closes the zoo and arranges to distribute its inhabitants to other facilities. The family and some of the animals board a Japanese cargo ship. Then the unexpected happens, and the boat sinks in the middle of the Pacific Ocean. Pi makes it to a lifeboat where his only companions are a zebra, a hyena, a orangutan, and a Bengal tiger named Richard Parker. The sixteen-year-old boy watches horrified as the war begins for supremacy between the animals. In the end, of course, just he and the tiger are left.

Luckily, the lifeboat is stocked with survival supplies and a detailed survival manual. Pi sets up equipment to collect water, learns to fish and catch turtles, and makes a raft for those times when he needs to stay some distance from Richard Parker. Everything he has learned about animals serves him well. In shark-infested waters, with no land in sight, Pi attends to the needs of the 450-pound tiger. This section of Martel's phantasmagorical novel is absolutely enthralling, a true adventure where Pi's physical prowess, intellectual courage, and spiritual perseverance are all tested. At one point, he observes: "For the first time I noticed — as I would notice repeatedly during my ordeal, between one throe of agony and the next — that my suffering was taking place in a grand setting. I saw my suffering for what it was, finite and insignificant, and I was still."

Throughout his journey, Pi practices religious rituals — "solitary Masses without priests or consecrated Communion hosts, darshans without murtis, and pujas with turtle meat for prasad, acts of devotion for Allah not knowing where Mecca was and getting my Arabic wrong." But these provide a stay against despair and loneliness and his grief for his lost family. The worst enemy is fear. He observes:

"It is life's only true opponent. Only fear can defeat life. It is a clever, treacherous adversary, how well I know. It has no decency, respects no law or convention, shows no mercy. It goes for your weakest spot, which it finds with unerring ease. It begins in your mind, always. One moment you are feeling calm, self-possessed, happy. Then, fear, disguised in the garb of mild-mannered doubt, slips into your mind like a spy."

One of the things that makes Life of Pi such an extraordinary read is that it covers so many fascinating subjects with aplomb. Martel provides overviews of animal behavior, survival at sea, the limits of reason, and a boy's coming of age. The novel is a work of spiritual adventurism, a expression of mystical awareness, and a salute to the ample powers of imagination and the versatility of storytelling. During his long stay aboard the lifeboat with the tiger, Pi notes: "My greatest wish — other than salvation — was to have a book. A long book with a never-ending story. One I could read again and again, with new eyes and a fresh understanding each time. Alas, there was no scripture in the lifeboat."

This ambitious novel is stuffed with ideas, interesting people, and exciting situations. Each reader could spend quite a bit of time pondering the spiritual implications of the deep relationship that develops between Pi and Richard Parker over the course of their confinement together. At first, the teenage is scared out of his wits that the animal will eat him. Then he tries to keep the tiger happy with food, fresh water, and regular routines. The final level of their interaction is a surprise that will only startle those who haven't had the delight of close mystical relationships with animals.

Life of Pi is a multileveled exploration of the beautiful mysteries that light up our lives and have no rhyme nor reason of their own. Yet without them, we would be nothing more than wonder-deprived creatures. 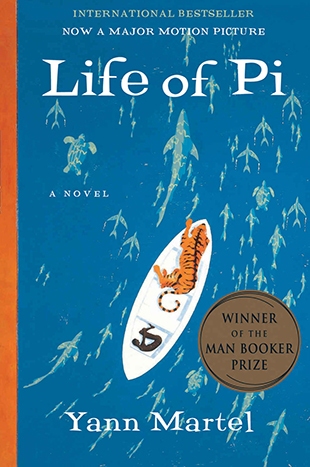