Beyond Belief The Secret Gospel of Thomas

By Elaine Pagels
Explains some of the reasons why it is difficult for many Christians to embrace pluralism or to accept the diversity of belief in the early church.

Elaine Pagels is currently the Harrington Spear Paine Professor of Religion at Princeton University. She was awarded the National Book Critics Circle Award and the National Book Award for The Gnostic Gospels. With natural ease and insight, this historian of religion plunges us into the formative years of Christianity in the second through the fourth centuries when various church leaders declared that true believers must hold to certain beliefs in order to be saved. Pagels outlines the battle between Irenaeus, the principal architect of what is called the four gospel canon (Matthew, Mark, Luke, and John), and those who found meaning and validity in the secret Gospel of Thomas (rediscovered in Egypt in 1945). Whereas John's Jesus declares "I am the light of the world" and that "whoever does not come to me walks in darkness"; Thomas's Jesus directs each disciple to discover the light within. The mystical approach in the Gospel of Thomas respects the image of God within every person.

Many of the same battle lines are still drawn between orthodox (the term means straight-thinking) Christians and progressives who are open to a great range of diversity within the community of believers. Today, as back in the times of Irenaeus, those considered heretical are identified with Satan. With this strong tradition, it's no wonder that it is difficult for many Christians to embrace pluralism or to open their hearts to the religions of others. Pagels succeeds in her criticism of the over-arching role belief continues to play in Christianity. Perhaps in the future, more believers will see and cherish the diversity within their own tradition and be able to benefit from The Gospel of Thomas and other early Christian texts. 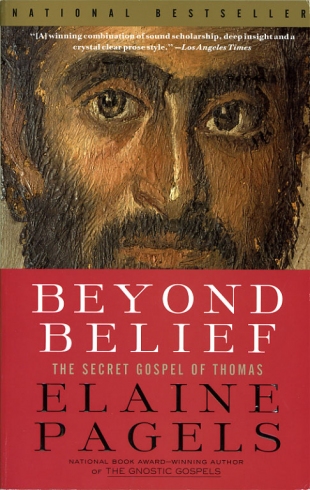