Cultural historian, author, and filmmaker Phil Cousineau quotes philosopher Ralph Waldo Emerson as saying that he would gladly walk a hundred miles through a snowstorm for one good conversation. Those who are starved for that kind of dialogue, one that plunges into meaningful subjects and doesn't come up for air, will be enthralled with this collection of 23 interviews with Huston Smith, Professor Emeritus of Philosophy, Syracuse University, who is considered the preeminent public scholar of world religions. He has been profiled in a PBS series with Bill Moyers and appears frequently on national TV and radio. The interviews with Philip and Bridgett Novak, Jeffrey Mishlove, Michael Toms, Timothy White, and others are divided into three sections: The Heart of Religion, The Struggle Between Science and Religion, and From Plato's Cave to the Enchanted Garden.

When asked in one of the interviews what he has learned from a lifetime of studying the religions of the world, Smith responds: "the winnowed wisdom of the human race." Cousineau is convinced his top priority is not religion but philosophy and that may be true given his unwavering interest in metaphysics. But it is Smith's vision of religion that will be his greatest legacy, as demonstrated in this passage:

Smith has been a pioneer in multifaith encounters practicing with Hindus, Zen masters, Sufis, Taoists, Jews, indigenous peoples, Tibetan monks, and others. "Christianity has been my central meal from the start, but I'm a strong believer in vitamin supplements, and what I have gained from these other traditions is tremendously enriching." In fact, only after exploring many other world religions was he ready to bring the same openness and empathy to traditional Christianity. Smith is respectful of religious institutions but agrees with Sri Ramakrishna who said: "Religion is like a cow. It kicks, but it gives milk too." That doubled-edged perception has served him well over the years.

A repeated theme is Smith's disdain for scientism and its refusal to acknowledge any place for the Eternal or the Transcendent. "Science deals with the physical universe, and religion deals with the whole of things." Smith comments on his personal experiences with Aldous Huxley, Joseph Campbell, the Dalai Lama, and others. He believes that indigenous people have significant wisdom to share with us in the twenty-first century. We loved this personal story about a spiritual practice Smith learned from a Native American:

"The Winnebago medicine man Reuben Snake was my pre-eminent teacher from the Native Americans. I recall one of the things he taught me. He told me, 'Huston, our tepees pointed east, and when we stepped out of them in the morning we would throw up our arms and shout Aho! when we saw the sun. Huston, you should do that, too.' And I do. At my first glimpse of the sun I raise my arms and shout, 'Aho!' I did it this morning, The first time I see the sun it infuses me with this inspiration, just like the sunlight brings vegetation and the beauty and all life."

The Way Things Are: Conversations with Huston Smith on the Spiritual Life edited by Phil Cousineau sparkles with philosophical insights, cross-cultural epiphanies, religious truths, memorable stories, and a wonderful batch of juicy quotations about the human adventure. This is a must read. 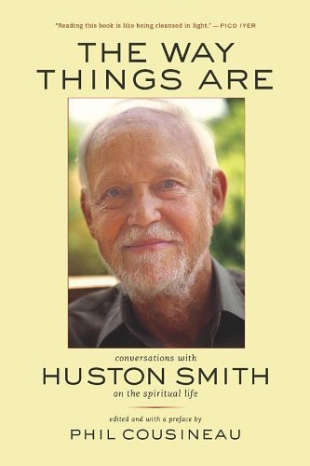