The Heart of Autumn Poems for the Season of Reflection

By Robert Atwan, Rosanna Warren
38 poems that chart the rhythms of this season of change.

”The poetry of autumn is inherently elegiac, and inherently vegetal,” writes Rosanna Warren, an award-winning poet who teaches at Boston University, ”For all its anxious observation of weather and plant life, it is also philosophical, devoted to parsing and translating the perennial lesson of our deathwardness. Each of the poems collected here registers a form of that knowing, and some explicitly organize themselves around the verb ‘to know.’ “

Robert Atwan, founding editor of the Best American Essay Series, has selected 38 poems by poets including Robert Bly, Archibald McLeish, William Butler Yeats, Emily Dickenson, May Sarton, Richard Wilbur, and others. They chart the rhythms of this season of change when the air gets cooler and crisper, the light grows more dim, the leaves blaze with color, and our thoughts turn to the transience of things.

Enter autumn as you would
a closing door. Quickly,
cautiously. Look for something inside
that promises color, but be wary
of its cast — a desolate reflection,
an indelible tint.

In “Autumn Movement,” Carl Sandburg laments that “no beautiful thing lasts.” Our favorite is “November Night" by Adelaide Crapsey:

Listen. With faint dry sound, Like steps of passing ghosts, The leaves, frost-crisp’d, break from trees And fall.

In five brief lines, she captures the sounds and sights and fading splendor of nature’s performance in autumn. 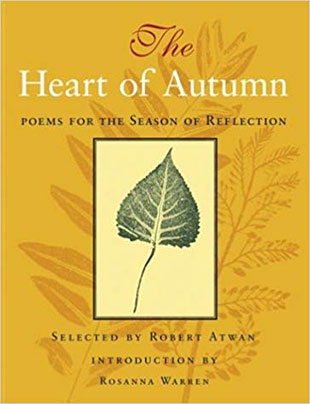