By Stephen Cope
Twenty-five interviews with seasoned teachers on the benefits of these practices.

Stephen Cope is a psychotherapist and yoga teacher, as well as the Senior Scholar-in-Residence at Kripalu Center for Yoga & Health in Lenox, Massachusetts. Over the years, he has asked meditation and yoga teachers how they became interested in these traditions, which teachers inspired them, and how the practice of yoga and meditation has transformed their lives and perspectives. Twenty-five individuals respond to these questions in this enlightening collection of interviews. Among them are Sylvia Boorstein, Edward Espe Brown, Lama Surya Das, Larry Rosenberg, Patricia Walden, and Larry Yang.

They discuss the art of living in the present moment, grounding awareness, letting things unfold, cultivating witness consciousness, tasting the silence, and kindness. Konda Mason talks about experiencing the expanded consciousness he felt as a child while laying in the relaxation pose at the end of a class. Ann Cushman says of yoga: "Moving my body into different shapes, I became a different person. Creating more space in my joints, I made more space in my mind as well. Twisting and bending and arching my body, I broke up the ice floes of self-judgment that had frozen in my muscles. I squeezed out the anxiety knotted between my shoulderblades. I melted the anger in the pit of my stomach into tears."

Longtime meditators and yoga practitioners as well as new beginners will benefit from the wisdom and epiphanies on these pages. 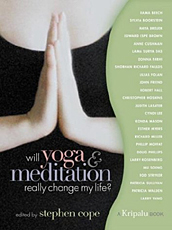