The Habit of Being Letters of Flannery O'Conner

By Sally Fitzgerald
Zeroes in on the gravitational center of this Southern writer's religious and artistic vision.

This compelling collection of letters by Flannery O'Connor (1925-1964) covers a time span from 1948, the year this Southern writer started looking for a literary agent, until 1964 when the last letter she wrote was found on a bedside table shortly after her death. The first thing one notices is the pleasure she found in books. They nourished her mind and spirit. In the realm of theology, she refers friends to the works of Romano Guardini and Teilhard de Chardin. In literature, Flannery O'Connor pays tribute to four authors who influenced her — Edgar Allen Poe, Nathaniel Hawthorne, Henry James, and Joseph Conrad. Among her peers, it is evident that she appreciated fiction by J.F. Powers, Walker Percy, John Hawkes, Bernard Malamud, and others.

Many sides of this creative soul are revealed in letters to literary folk (Robert Lowell, Elizabeth Hardwick, among others), religious friends (Father John McCown, John Lynch), and individuals in the publishing world (Elizabeth McKee, Catherine Carver, Robert Giroux). Here she is chuckling over Roy Rogers' horse in a religious service, and there she pokes fun at a lady in Texas who wants to build a chapel in the shape of John Glenn's space capsule. At one point she relates to a friend that she'd like to create the impression "that I'm a hillbilly Thomist." Yet despite all her letters about faith, O'Connor admonishes herself to watch out for "smugness' which is "the great Catholic Sin."

One group of letters provide the best insight into this artist's "habit of being." They are written over a nine-year period to a friend who is called "A." In them O'Connor talks extensively about her Catholic vision of life, and even more importantly, of the intersection where her faith and fiction meet to transform each other. Here is a sampling:

"I think that the Church is the only thing that is going to make the terrible world we are coming to endurable; the only thing that makes the Church endurable is that it is somehow the body of Christ and that on this we are fed. It seems to be a fact that you have to suffer as much from the Church as for it but if you believe in the divinity of Christ, you have to cherish the world at the same time that you struggle to endure it."

"For me a dogma is only a gateway to contemplation and is an instrument of freedom and not of restriction. It preserves mystery for the human mind."

The Habit of Being zeroes in on the gravitational center of Flannery O'Connor's religious and artistic vision. This individual carried her pain of a long illness without complaint and strove in all her days to be alert to the spiritual presences in the visible world around her. These letters bespeak the energy and the commitment that made Flannery O'Connor both an exceptional artist and an unusual human being. 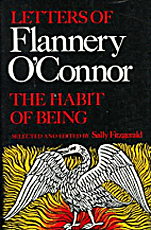