The Shadow in America Reclaiming the Soul of a Nation

By Jeremiah Abrams
A bellweather book with nine essays on our public and private lives.

The shadow has traditionally been a metaphor for the dark side of personality — the part of ourselves we dislike and, out of shame, want to hide from awareness. Editor Jeremiah Abrams expands the description of this term to include the dark twin, the disowned self, and the repressed self. We are dealing with shadow when we talk about confronting our demons, wrestling with the devil, experiencing a dark night of the soul, or facing a midlife crisis.

Abrams has assembled nine essays which challenge us to discern shadow in our private lives and in American culture. The editor claims that we need, in his words, "to honor shadow, acknowledge it as a part of us, not banish it, or heal it, or be dominated by it." The Buddhists have the right idea when they say we should not try to get rid of our negative energy but, rather, should transform it with the energy of enlightenment.

According to Abrams, we would all be better off if we honored the shadow with an acknowledgement of the inherent ambiguities of life. Accepting our own dark side might make us less apt to project it onto others. Accepting the shadow in America, including its flaws and violence, might make our love of country more realistic. 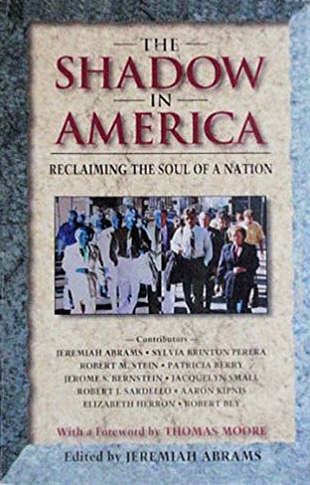