What Would I Believe If I Didn't Believe Anything? A Handbook for Spiritual Orphans

By Kent Ira Groff
A example of the riches awaiting those who explore everyday spirituality with mystery, wonder, and joy.

According to surveys taken by the Barna Research Group, 72 percent of those born in the United States between 1964 and 1981 — the Gen Xers — are not involved in a church community. Kent Ira Groff, who is founding mentor of Oasis Ministries for Spiritual Development and adjunct professor at Lancaster Theological Seminary, believes that this generation of "spiritual orphans" can find faith in a variety of ways beyond the traditional belief systems of established religions. He writes: "I was standing in a parking lot when the question came to me: What would I believe if I didn't believe anything?" The answer is in this volume. It is filled with lively illustrative material from movies, poetry and philosophy, music, and sports. For Groff, grace often comes through the spiritual practices of wonder, mystery, and joy.

He quotes Robert Hunter for Jerry Garcia in "Scarlet Begonias": "Once in a while / you can get shown the light / in the strangest of places / if you look at it right." Sacred meanings are shining through body language, vulgar happenings in the world, dreams, beautiful things, community, sex, and work. To mine them, Groff structures reflection exercises into each chapter. For example, he suggests physical exercise as prayer, journaling a night dream or a day dream, watching the movie Gandhi, making an inventory of intercultural friendships, or contemplating an act of goodness. This exercise is titled "Let Your Anger Take a Form of Nature":

"Here is an idea from Flora Slossen Weullner in her book Heart of Healing, Heart of Prayer. Sit with your anger and see if it might take some form of nature: a bird, animal, waterfall, or fire. This example shows some male-female differences. Two persons sat in silence. The woman then reported seeing her anger as a wave in the sea, rising to a crescendo and then crashing . . . carrying her feelings into the sea of God's love. In the same moment, the man had pictured his anger as a bolt of lightning, zooming red-hot feelings into the cosmic heart of God. (I sometimes picture my anger as a grain of sand, irritating the oyster — and then transforming to a pearl.) See what emerges for you. Reflect on it; draw it in your journal. Share it with someone."

Groff calls this new kind of faith "passionate yet inclusive." It can find hope and transformation in a movie like Hurricane or in a whimsical observation by artist Andy Warhol who said, "Let things that would ordinarily bore you suddenly thrill you." Groff's book is another robust example of the riches to be found in everyday spirituality! 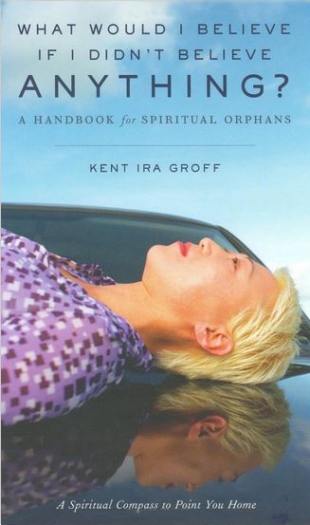